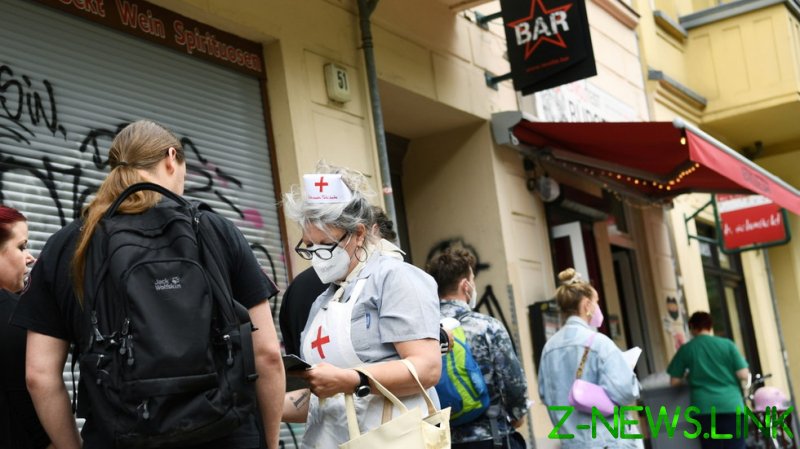 Germany might be in for yet another wave of Covid-19 cases, Helge Braun, Merkel’s chief of staff, told Germany’s tabloid Bild on Sunday. “The number of new infections is increasing even faster than in the previous waves. That worries me very much,” Braun, who is also a medic himself, warned.

The official said that the nation could reach some 100,000 daily infections in just nine weeks and that would likely prompt the government to take some drastic measures to tackle the spread of the virus.

“If we have a high rate of infection despite our testing procedures then the unvaccinated will have to reduce their contacts,” Braun said. That would mean that those unvaccinated would not be allowed to go to a restaurant, a cinema or a stadium even if they have been tested simply because “the risk to everyone else is too high.”

The head of the chancellery also warned that a fourth Covid-19 wave would put tremendous pressure on the economy, with sick leaves potentially reaching “historic highs,” since many unvaccinated people would have to be quarantined anyway if they come into contact with an infected person.

The official also named vaccination as the best remedy against a looming fourth wave. He encouraged municipalities to offer people “easier” ways to get a jab, and urged employers to “promote vaccination” – for their own sake.

“Vaccination protects me [to] 90% from a serious corona disease,” Braun said, adding that anyone who gets a jab and does not fall ill when the disease strikes “would be urgently needed at their workplace.”

Merkel’s chief of staff also blamed pretty much any seasonal epidemic on those unwilling to take a jab. Germany does not get high infection rates from vaccinated people even if some laboratory tests do detect the virus in their bodies, he argued. High infection rates are a result of “serious infections in the unvaccinated population if the vaccination rate is not high enough,” he added.

When asked whether slapping a certain part of the population with targeted restrictions is legally permissible, Braun said that the state “has a duty to protect the health of its citizens.” He also claimed that Germany might avoid another total lockdown if the vaccination rate is high enough.

Some German politicians, however, clearly believed that Berlin would overstep its boundaries if it introduced such restrictions.

The deputy head of the Free Democratic Party Wolfgang Kubicki blasted the proposed as a de facto “introduction of compulsory vaccination through the back door.”

Such a categorization of fundamental rights into a first and second class is clearly unconstitutional.

Merkel earlier limited herself to saying that “the more [there are of those] who are vaccinated, the freer we will be again.” She did not mention any of the measures proposed by Braun.

Armin Laschet, Merkel’s potential successor and her party’s chancellor candidate at the September general elections, also distanced himself from what he called “compulsory vaccination” and attempts to “indirectly put pressure on people to get vaccinated.”

In a free country, there are civil liberties not only for certain groups.

Just over 49% of Germans were fully vaccinated as of July 23, according to the Robert Koch Institute, Germany’s government agency responsible for disease control and prevention. More than 60% of Germans have received at least one vaccine dose. Still, the German media reported that the vaccination rates in the country have been gradually going down.

If Germany does introduce restrictions for those unvaccinated, it would not be the first European country to do so. In neighboring France, President Emmanuel Macron’s government already introduced the so-called “health passes” that are required for people to attend certain public venues. The passes can also be obtained if a person recovered from Covid-19 in the last six months or has a recent negative PCR test.

The measure – introduced together with a vaccination mandate for medics – sparked massive public uproar and prompted tens of thousands of people to take to the streets of French cities for two weekends in a row to voice their discontent.