Home / WORLD / ‘More died than in all of WW2!’ Biden wants all Americans masked up & travelers quarantined, predicts 500,000 Covid deaths by Feb 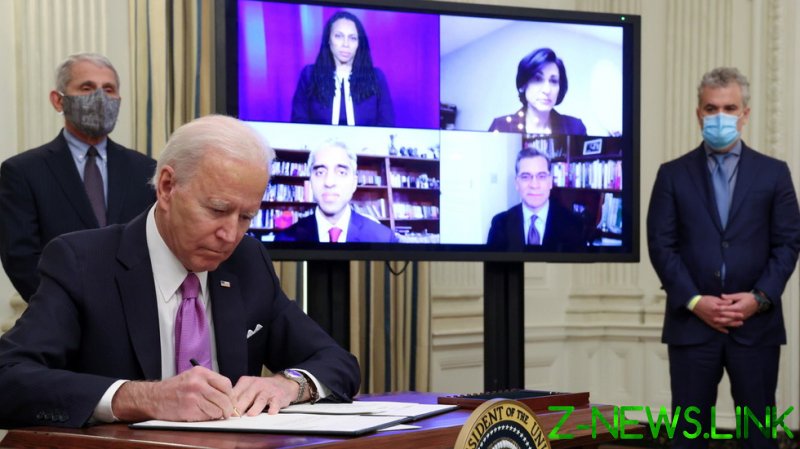 Flanked by Vice President Kamala Harris and corona czar Anthony Fauci, Biden gave his first Covid-19 briefing on Thursday, offsetting his initial message of doom and gloom by insisting that “help is on the way.”

“Things are going to continue to get worse before they get better,” Biden said, explaining that “we didn’t get into this mess overnight, and it’s going to take months for us to turn things around.”

International travelers arriving in the US will not only have to be tested for the virus before embarking on their journey, but must quarantine upon arrival, Biden said.

He also announced an “executive action” mandating masks for interstate travel – a requirement that is already in place – and referred to Wednesday’s executive order mandating masks on federal property.

The president declared the launch of a “full-scale wartime effort” to manufacture medical supplies, juxtaposing the 400,000 Americans who have died with Covid-19 to the country’s World War II death toll. Up to 420,000 Americans died during the war, part of the global death toll of some 75 million people, including estimated 27 million military and civilian deaths in the Soviet Union.

At one point during the Thursday briefing, the president attempted to reassure Americans by dangling Fauci in front of them, insisting that unlike his predecessor’s administration, “science and public health experts will speak directly to you” while working “free from political interference” and admitting when mistakes are made.

While the science behind mandatory face coverings remains a somewhat contested issue and nations around the world have been picking varying approaches of their application, Biden has made the mask-wearing a central part of his administration’s fight against the novel coronavirus.

Ironically, hours after issuing his mask mandate on Wednesday, Biden and his family were photographed at the Lincoln Memorial without a mask in sight, raising a number of eyebrows. He was also not wearing a mask during Thursday’s press conference. Neither was the White House press secretary Jen Psaki at her own briefing shortly afterward.