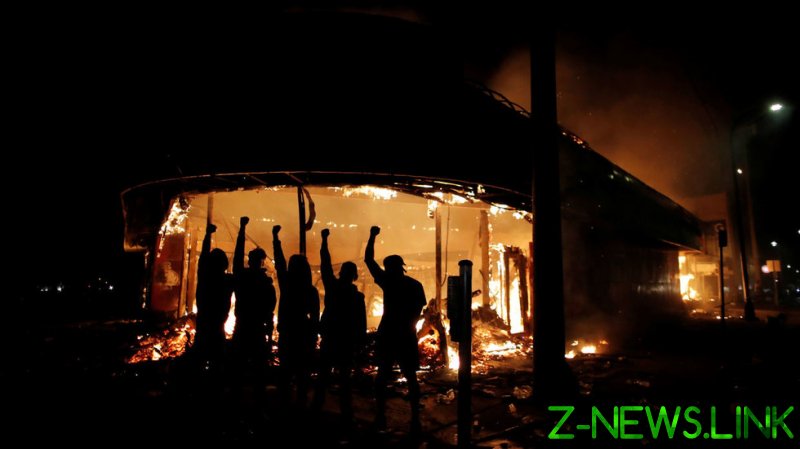 The Rasmussen Reports poll, released on Wednesday, found that 66% of American voters believe Congress should investigate the Black Lives Matter riots that spread across the nation following the May 2020 slaying of George Floyd in police custody. That compares with 49% who support House Speaker Nancy Pelosi’s select committee probe of the January 6 Capitol riot.

The findings come amid continuing political polarization over the Capitol breach, which President Joe Biden and other Democrats have touted as a racially motivated insurrection and “the worst attack on our democracy since the Civil War.” Pelosi on Wednesday rejected two of the five Republican appointees to the investigative committee, at which point House Minority Leader Kevin McCarthy said the GOP would not participate in the “sham process.”

The BLM riots left dozens of people dead and 2,000 police officers injured. In Minneapolis alone, property destruction was the worst the US has seen from civil unrest since the Los Angeles Rodney King riot of 1992. Four people died during the Capitol riot, which sprang from a protest of alleged election fraud. Three were protesters who died of natural causes, such as heart attack. The fourth was a rioter who was shot by a police officer. Also, hours after the riot, Capitol Police officer Brian Sicknick died from a stroke in his office.

Only 21% of respondents in the Rasmussen poll said they would oppose a congressional investigation of the BLM riots, just half the percentage who don’t believe Congress should probe the Capitol riot. While most of last summer’s BLM demonstrations were peaceful, more than 500 turned violent.

Voter support for investigating the BLM riots is similar across all racial groups. About 67% of whites, 64% of blacks and 66% of Hispanics said such a probe should be done. Even 60% of Democrats agreed that the violent protests should be investigated, compared with 75% of Republicans and 63% of independents.

The National Police Association (NPA), which partnered with Rasmussen on the poll, said voter support for a probe of the summer riots stems from the conduct of local politicians – both in their handling of the violent demonstrations and in policies they say made cities less safe in the aftermath.

“When the mayors of cities in which violent riots took place in 2020 refused to let police immediately stop the crimes taking place, it sent a message to violent criminals across the nation that crimes will be allowed and criminals won’t be touched,” the NPA said in a statement.

The Rasmussen poll showed that 63% of voters believe BLM rioters and looters should be prosecuted, just as Capitol riot participants have been. Likewise, 65% said Biden and Vice President Kamala Harris should meet with the family of retired St. Louis police captain David Dorn, who was murdered during a BLM riot, just as they did with Floyd’s family.

About 65% of respondents said they disagree with the BLM claim that the American flag and pro-police flags are symbols of racism. And 53% agreed that Congress should award medals to officers who defended their cities during the 2020 riots, just as Pelosi called for Capitol Police members to get awards. Moreover, while 51% believe that politicians who downplay the Capitol breach deserve to be criticized, 62% said those who try to diminish the summer riots merit rebukes.