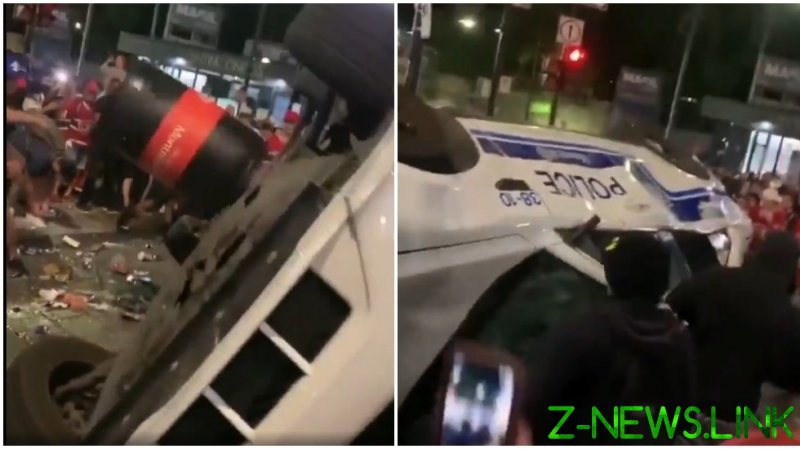 Thanks to a 3-2 win in overtime over the Las Vegas Golden Knights, the Canadiens – known as the Habs – clinched the Western Conference Championship 4-2 in Game Six and will now play their first Stanley Cup final series in 28 years.

Celebrations spread from the Bell Center to the streets of Montreal and went on well into the night.

Thousands of fans set off fireworks, fought and even attacked police officers with 15 arrested and two cops injured.

The masses had to be dispersed by tear gas, with  Montreal Mayor Valerie Plante insisting “there was a bit of ruckus, but overall it went well” to reporters on Friday morning.

But footage that has been uploaded to social media tells a different story, with one clip showing a throng of fans trashing an overturned police vehicle.

“Riots have already started in Montreal after the Habs game,” read the caption to a clip already seen nearly 200,000 times.

“This the part about winning I don’t like. Not a good look for the city,” it was added.

“They were having fireworks shot at them and sh*t thrown at them, what do you expect them to do?” came one reply to that particular suggestion.

“Lots of teams win without this happening. Even in riot prone LA, not one instance of rioting after either La Kings [Stanley] Cup win,” pointed out someone else.

“Because Americans don’t have passion like Canadians,” an individual from north of the border butted in.

“Especially people in LA and the southern (US) teams. This is absolutely not OK by any means but you would never see those American fans doing that because they don’t know any better.”

“These are not even Hab fans,” it was claimed, before that person added “these are people who went downtown looking to cause trouble” and noticed the difference in clothing to matchgoers wearing official merchandise.

A local reporter shared footage of littered streets, which had a lot of replies along that lines of “is that all?” from those who thought there was no other damage.

“Just to clarify the misleading articles, fans were celebrating and fireworks were going off since the beginning of the game,” said one punter.

“At the end riot police decide to use tear gas while kids and elderly are also watching. Disgusting act by the Montreal Police.”

Now it remains to be seen what kind of damage will be done after the finals themselves, irrespective of whether the Habs win or lose to either the Tampa Bay Lightning or New York Islanders, who will do battle in Game 7 of the Eastern Conference Championships this evening.