Home / WORLD / Monsters & the military: How ‘Godzilla vs Kong’ follows a long tradition of US meddling in the movies

Monsters & the military: How ‘Godzilla vs Kong’ follows a long tradition of US meddling in the movies 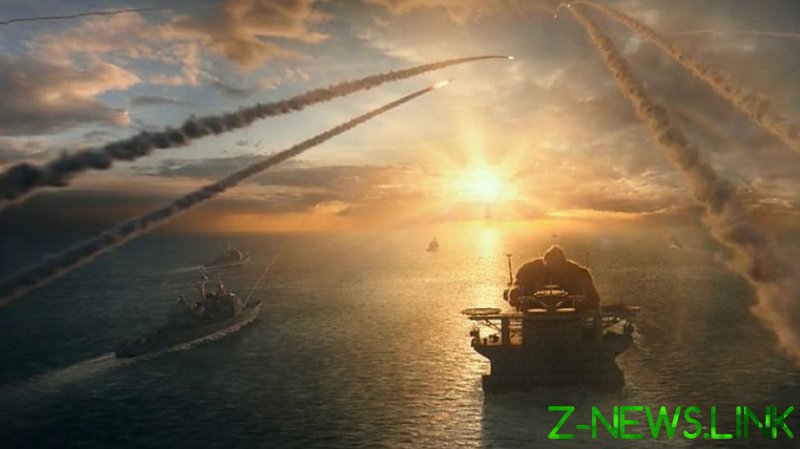 Godzilla vs Kong has debuted to a gargantuan box office and critical response, but overlooked in the excitement over a genuine tentpole release – something that has been missing during the pandemic – is the tale of the Pentagon’s involvement in monster movies.

It is not a natural or easy collaboration, as it often pits the mighty US military against the titanic strength of vast apex predators. As former Department of Defense chief Hollywood liaison Phil Strub observed in an interview, “You have to be walking down the halls of the Pentagon thinking ‘How would we defend against a giant radioactive lizard?’. It’s not like I can go to the command center and there are war plans.”

Strub’s joke belies the fact that the Pentagon has been supporting and influencing the giant monster movie genre for decades, in some cases making sweeping changes to the scripts.

This relationship goes all the way back to the classic creature feature, and Kong’s first appearance in a starring role in 1933. In the iconic ending, where Kong scales the Empire State Building before being shot and falling to his death, the producers wanted to film real US Navy planes to add realism.

As a Pentagon database outlines, “Navy turned down request for planes to deploy against King Kong on Empire State Building on grounds they were available from commercial sources.” However, the film-makers were not deterred, and one producer “went to Floyd Bennett field on Long Island and convinced commander of naval air station to send a flight of four planes (one piloted by a marine) to attack King Kong.”

Godzilla and the giant ants

The original Godzilla (1954) was produced with help from the Japanese military, especially the coastguard, showing them nobly defending Japan from the fire-breathing behemoth. The film was a warning about the dangers of nuclear energy and nuclear weapons, although this element was diluted for the American cut that was released a few years later.

Meanwhile, in the US the DOD was not so accommodating. The rash of nuclear-themed horror movies in the 1950s ran counter to US government efforts to normalise the bomb and make it seem like a justified part of the American arsenal. Films such as Strategic Air Command got full support, while the giant ant thriller Them! was rejected because, according to one memo, “Story is fantastic. Ten foot ants are the result of the first atom bomb explosion.”

A few years later the makers of Beginning of the End didn’t even bother to approach the Pentagon, as it had become clear that giant nuclear-powered insects were not something the military enjoyed seeing on screen. An entry in the DOD database shows that it kept tabs on the film, and wasn’t happy with the military’s depiction.

It says, “Typical atomic-generated enemy, in this case giant grasshoppers. Illinois National Guard tries and fails to stop advance toward Chicago. Regular Army brought in in form of about five minutes of stock combat footage showing tanks, trucks, artillery, men all firing at grasshoppers without success.”

Kong returns, and so do the DOD

It seems the popularity of these movies, and the potential for a more positive depiction of the military in this mega-genre, led to a rethink within the entertainment liaison offices. By the time of the 1970s remake of King Kong the policy had changed, and the Air Force “provided jets for attack on King Kong in bad remake of classic original.” This time, the Air Force was seen shooting Kong down from on top of the World Trade Center.

While the film is widely considered to be a tepid rehash, especially when compared to the 1930s original, it is an exploration of the effects of colonialism and empire on indigenous peoples and their cultures. Coming in the mid 1970s, it could also be seen as a metaphor for the US war against Vietnam.

It appears that this is what the producers intended, as the original script had the military using flamethrowers against Kong, exactly as it had against the Vietcong during the war. The DOD file on the 70s King Kong details various changes it insisted on in return for support, including the removal of the flamethrowers.

It also objected to a scene where a character says he’d obtained classified photographs by bribing someone at the White House, and a moment during Kong’s rampage showing, “National Guardsmen firing a bazooka at looters.”

The DOD’s main concern was that it not be seen killing a giant animal, fearing it would turn the audience against the military. One memo asked the producers to insert dialogue referring to the soldiers trying tranquilisers to subdue Kong, before resorting to more lethal means.

Former head of DOD-Hollywood collaborations Don Baruch commented, “General audience reaction might be negative to the direct killing approach.” And he added, “Of course, from a box office point of view it might even have value to save Kong for another day and a sequel!”

Jurassic Park III: No sympathy for the dinosaurs

After the DOD helped on the 1998 Godzilla, this concern about the military being shown as vicious bullies destroying the wonders of nature surfaced again a few years later, on Jurassic Park III. The producers approached the DOD about using an Air Force A-10 in a scene where it would fight against pterodactyls.

As Strub recalled, “I read the script. I called him back [and said], ‘They’re tank killers. A flying dinosaur is no match for an A-10. It would only cause the audience to feel pity for the dinosaur’.”

So that scene was scotched, but Strub wasn’t finished. He went on, “And I said, ‘… at the end you want to have a nice military rescue?’ They called back and said yes.”

Military documents show just how willing the Jurassic Park III producers were to accede to the military’s requests. One memo says of this final rescue sequence, “Even though it is a short scene, the producers will ‘punch it up’ in any manner we dictate to make sure the audience knows that we are saving the people threatened by the big lizard!”

The recent rebirth of the mega-monster genre, primarily through Universal’s MonsterVerse, has also been dependent on government support. 2014’s Godzilla could not have been made without the DOD, as the contract signed with the producers lists several pages of Pentagon assistance, ranging from ships and fighter jets to filming locations and military extras.

In exchange, the film-makers made numerous script changes. The protagonist – a Navy EOD (Explosive Ordnance Disposal) tech – was watered down from the deceitful manipulator he was in early drafts. A set of script notes from the Marine Corps lists numerous other changes, including minimising the extent to which Godzilla smashes his way through swathes of military vehicles and troops. They also changed a missing nuclear submarine from a US ship to a Russian one, in keeping with the established movie trope of loose Russian nukes causing havoc for the rest of the world.

However, Kong: Skull Island inverted this relationship by functioning as a metaphor for the Vietnam war, with Kong playing the Vietcong. The movie benefited from colossal support from the Vietnamese government, including the Vietnamese Army. This may have been a factor in the DOD’s decision to withhold support from the follow-up Godzilla: King of the Monsters, although a scene where fighter pilot ejector-seats go directly into the mouth of an onrushing giant monster may also have proven difficult for the DOD to swallow.

It appears the DOD-MonsterVerse relationship is back on, as in Kong vs Godzilla the Pentagon is shown working side-by-side with Monarch to deal with the giant monster problem. While a fight between Kong and Godzilla destroys most of a US Navy carrier strike group, the sacrifice is not in vain, and the military then plays a crucial role in transporting Kong to the Antarctic using helicopters and MV-22 Ospreys.

Not on the Rampage

Nonetheless, the military remains sensitive as to how it is portrayed in monster movies. Army documents show that it engaged with the producers of Rampage but ultimately rejected the project because of the film-makers’ “Failure to incorporate script notes provided by [the Army] into the revised draft of the script.”

The Army’s main objection was that, “Nearly all Army and Army National Guard personnel and equipment were killed or destroyed by the genetically altered animals with no chance of success in their missions.”

So, the rules for movie producers are clear – the military must be shown as heroic, tough and effective, but not so effective that they are just murdering innocents, whether those innocents are Afghan civilians, flying dinosaurs or a 300-foot fire-breathing lizard.