Home / WORLD / Modern India at 75: Looking back at its history, British colonization & imperialism, and independence

Modern India at 75: Looking back at its history, British colonization & imperialism, and independence 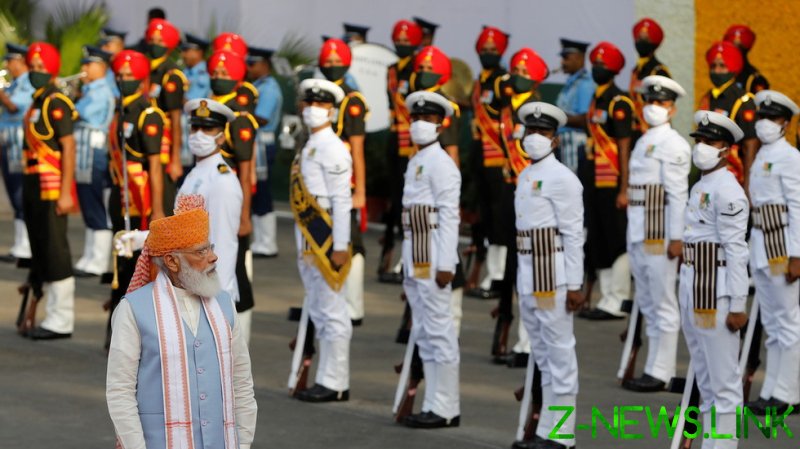 For 2,000 years, India was among the richest and most advanced civilizations in the world. Ancient Indian philosophers were contemplating the meaning of life when their counterparts in Europe were emerging from forests.

Indian goods and ideas were coveted all across the globe. From the decimal numeral and positional system ubiquitous today, to the world’s first documented surgical procedures (from rhinoplasty to cataract to dentistry), to the world’s first formal grammar and language analysis, and “formal system” of logic and proving theorems from axioms (the basis of modern computers and programming languages).

Ancient Indian scientists also calculated the length of the Earth’s orbit, which remained the most accurate estimate for over a thousand years. Indian philosophers developed the world’s first documented philosophical schools of atheism. The world’s first application of Metrology with standardized measurements and technical standards on a mass scale was first observed and documented in India, and so were diamond mining, gravitational force, trigonometry, atomic theory, chess…the list is endless.

Roman senators lamented the loss of gold and silver in exchange for high-quality goods and clothes – and complained that their people used too many Indian spices and luxuries. Since they didn’t have anything to offer that India wanted, the payments had to be made in gold and silver, which started emptying the Roman treasury. Pliny the Elder even exclaimed that India was “the sink of the world’s gold!”

This continued for around 2,000 years. In the 16th century, Portugal protested that the silver it had stolen from South America was being lost to India. A hundred years later, the British bourgeoisie would express similar concerns and insist that the East India Company sell British goods in India to make up the balance.

In 1700 AD, India commanded the single highest share of the world’s economy. It produced a quarter of the world’s GDP as well as its industrial output. From the late 17th to the early 18th century, India accounted for 95% of British imports from Asia. The Indian economy at the time was in a proto-industrial state, perhaps almost on the verge of a “industrial revolution” of its own.

So, what happened? Imperialism happened. Instead of India, it was Britain that had the industrial revolution – financed by Indian capital. By the mid-18th century, the relative situation between India and Britain was largely reversed, which saw Britain become the world’s leading economic and commercial power, leading directly to its superpower status.

The largest wealth extraction project in the world

Wealth extraction and economic exploitation are central to colonialism. A typical colonial trade relationship is when the colonizer extracts or uses wealth from the colony – whether natural resources or manual labor – and then ships this capital back to its home nation. The “colony” becomes bereft of resources and sees little benefit from this trade. Colonial labor is exploited, raw material is exported to the colonizer, and the “colony” is then forced to import finished goods and serve as a market. This is often combined with market monopolies, high taxation, and brutal, oppressive rule.

For centuries, India imported gold and silver from the rest of the world and exported finished goods and luxury items. During the era of colonization, this was reversed, with India exporting its own raw materials and agricultural products and importing finished goods from Britain, providing ready markets and profits for British merchants.

Storm in a million tea cups

In the 18th century, the British aristocracy and bourgeoisie were addicted to tea, which was grown exclusively in China at the time. Tea soon became the most imported item from China, edging out silk and porcelain. Unfortunately, just like India with Rome 1,800 years ago, China wasn’t interested in any British goods in return; it would accept only gold and silver. This irked Britain, but it had no choice but to agree.

In desperation, when it tried to impose a tax on Chinese tea sold in its thirteen colonies in America at the time, the colonists protested and threw tea chests into the sea in Boston harbour, now referred to as the famous “Boston Tea Party” incident, with the slogan “No taxation without representation!” Such market manipulation created much resentment, and led directly to the American war of “independence” – in which largely one group of imperialists fought another, which ended the First British Empire.

The British treasury started emptying, with some speculating that the entire nation would be bankrupt if this chronic trade imbalance continued.

But soon, the East India company, which had a monopoly on trade, found something that the Chinese people did want – Opium. Like the Portuguese before them, British merchants discovered that they could sell opium grown in India to China at substantial profits. The British East India company soon established a monopoly on opium production in Bengal.

When they tried to flood the Chinese market with Opium, the Qing dynasty banned it. Britain then dispatched gunboats and fought literal wars with China just to get it to legally import the drug and open up ports for trade. This paved the way to sell opium and create a whole generation of opium addicts, this time under the guise of “free trade” (a rhetoric still repeated by western nations today). Britain became both the world’s most imperialist state and the world’s largest drug smuggler.

In 1906, around 27% of the adult male Chinese population was addicted to opium.

This opium was grown in India. Indian farmers, especially in Bengal, were made to grow opium by the East India company – either by incentivization or coercion. However, poppy was cultivated at a substantial loss. Opium production was highly exploitative and impoverished Indian farmers.

Britain soon managed to smuggle China’s trade secrets of tea horticulture and manufacture. It used the stolen knowledge to grow tea in its Indian colonies. Slavery was abolished in the British empire in 1833 – but only officially. Indian peasants were made to work in conditions that were only slightly better than slavery, with the workaround bureaucratic terminology of “indentured labor.”

Into the 20th century

Meanwhile, as the world entered the 20th century, India’s freedom struggle started gaining momentum. Britain carefully curated opposition to its rule. Instead of simply crushing all opposition, it allowed certain performative opposition to function and “oppose” it. This provided the state with some much needed breathing space.

Gandhi, who by then was already on his way to being the face of the Indian struggle, was encouraged by the British because of his “non-violence” philosophy. After all, who wouldn’t want an enemy who doesn’t fight back and doesn’t respond to fire with fire? No wonder Gandhi is highly respected by western imperialist states even today – and nowhere more so than in Britain. It often seems he is loved in the West even more than he is loved in India.

Meanwhile, actual revolutionaries, who were real threats to British rule (unlike Gandhi, Nehru, and the bourgeois Congress Party), were killed off immediately. Bhagat Singh, whose popularity at the time surpassed even that of Gandhi, was hanged on flimsy pretences and legal manipulation, while still maintaining the façade of the “rule of law” and an “independent judiciary.”

Eventually, realizing that it would no longer be able to rule India after the Second World War, Britain left hastily a few decades later. The country was partitioned, and Britain left behind a legacy not just of famine, an opium trade, corporate raiding, economic exploitation, colonialism, and imperialism, but also of disputed, un-demarcated borders. All border disputes that India has with its neighbours today, including those which it has fought wars over, are legacies of British rule and its roughshod drawing of colonial boundaries.

India did not get what its socialist revolutionaries wanted – a revolution. Instead, it got what Gandhi and Nehru wanted – a mere transfer of power from the British government to the Indian.

In the last 74 years, India has achieved great strides in its economy and science and technology, and the material conditions of the Indian people have drastically improved. Literacy, education, infrastructure, women’s rights, digitization, everything from basic sanitation to broadband access has seen an improvement, particularly in the last few decades. The nation has a successful nuclear deterrent, and was the first nation on Earth to enter Mars’ orbit on its maiden attempt.