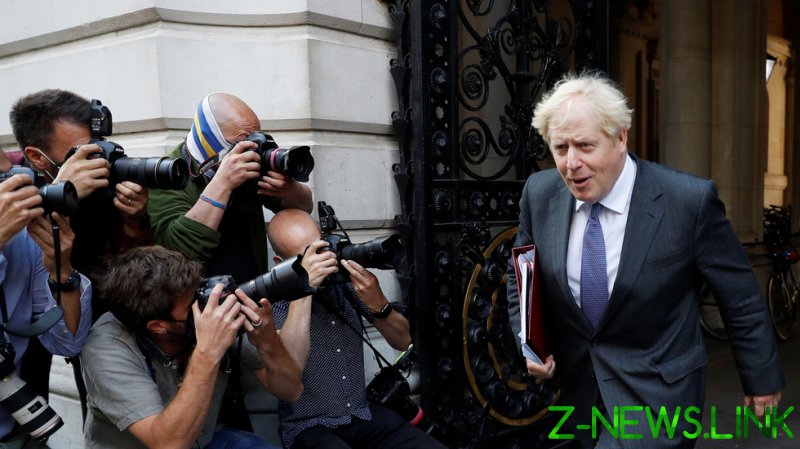 The latest draconian measures to combat the spread of Covid-19 are hard enough to stomach for most people, who are already thoroughly sick of being told what to do by a British government that has mishandled the coronavirus pandemic from day one. But the confusing message about grassing on those who break the law is even harder to swallow.

Particularly when the prime minister himself suggested snitching on neighbours was not really his thing, while his home secretary, Priti Patel, was adamant we should shop the law-breakers without hesitation.

It’s just another example of BoJo being at odds with the advice given by his own government-appointed experts, ministers and scientists: handshaking or no handshaking, masks or no masks, groups of two, six or 50, to the office or not, schools open or shut, jaunts to Barnard Castle with the missus or a strict national lockdown.

What the hell is going on?

The PM putting on a serious face and telling us we should stick to the mandate that there should be no socialising in groups of more than six – or else – but then admitting later he would not necessarily inform the authorities if he saw people ignoring the law, makes a mockery of the edict.

Although he was quite well turned-out when facing the Commons liaison committee, most people think of BoJo with his shirt-tails flapping in the breeze, tie askew, suit jacket mis-buttoned and tousled mop of hair doing its own thing. He wears a permanent half-grin at his own private joke, eyes flitting around the room when he speaks, as if he’s looking for co-conspirators to share the hilarity of what he’s saying, and he cannot resist a clever quip, a pun or chance to show off his mastery of language – either English or Latin.

This combination makes it very, very hard to take him seriously. It’s like having the class clown suddenly appointed teacher of the citizenship lesson, where we all sit waiting for the punchline.

In his latest interview with The Sun newspaper, he showed typical form, saying, “The only way to make sure the country is able to enjoy Christmas is to be tough now. So if we can grip it now, stop the surge, arrest the spike, stop the second hump of the dromedary, flatten the second hump. Dromedary or camel? I can’t remember if it is a dromedary or a camel that has two humps? Umm. Please check. Anyway a double hump. So that is what we need to do!”

And this is our prime minister delivering bad news.

No wonder US presidential candidate Joe Biden felt no qualms about having a pop at him over his handling of Brexit, when frankly, interfering in another nation’s domestic political affairs – particularly when that nation is the other half of the so-called “special relationship” – is normally considered a no-no.

But the British people fell for BoJo and his undoubted charm – foolishly, it now turns out – handing him a parliamentary majority of such magnitude that he does what he wants, says what he wants and makes a mess of governing a country facing huge social turmoil, an education system in pieces, economic meltdown, massive unemployment and a future so bleak we cannot even begin to imagine.

And it’s not just those of us in gen pop who are baffled by the disappearance of the boisterous, energetic leader that was returned to rule last December.

His own party members were horrified by the startling admission that he intended to break international law during the shambolic Brexit negotiations. And now even the usually reliable cheerleaders at The Spectator magazine – of which BoJo is a former editor – have taken their gloves off, savaging the PM over his Covid-19 policy, Brexit dealings, silence over the Black Lives Matter protests, and a desire to be liked so ingrained that he cannot stand to be the bearer of bad news.

So even the unwelcome news of local lockdowns and the threat of further tough action over coronavirus is announced with the pledge to end the misery by Christmas, based on nothing more than the fear of people turning against him.

All these boasts ended in disaster. And now, unless things take a real upswing soon, so will Boris Johnson’s premiership.