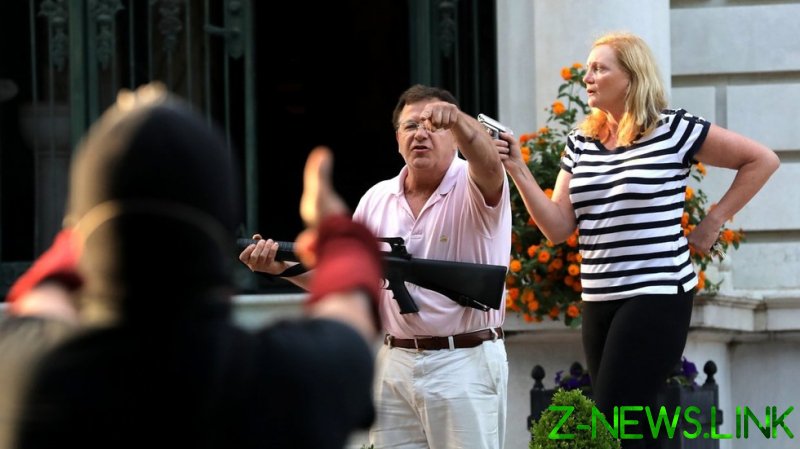 In a Monday filing, Missouri’s chief disciplinary counsel Alan Pratzel asked the state’s highest court to reprimand Mark and Patricia McCloskey over the June 2020 incident, in which the couple brandished weapons at a group of demonstrators who entered their gated community to protest at the nearby home of former St. Louis Mayor Lyda Krewson. Though no shots were fired and nobody was harmed, footage of the encounter circulated widely and garnered national attention, resulting in charges for the McCloskeys.

In calling for an indefinite suspension with no ability to apply for reinstatement for at least six months, Pratzel argued that the McCloskeys’ actions showed “indifference to public safety” and demonstrated “moral turpitude,” adding that while a pardon may undo a conviction, “the person’s guilt remains.” He also cited previous cases in which lawyers were disciplined for similar acts involving “moral turpitude.”

It is so far unclear how the state Supreme Court will respond to the request, which comes from the state’s top legal ethics watchdog.

The McCloskeys’ case came at the height of nationwide police brutality protests kicked off by the death of George Floyd in May 2020 and was highly polarizing, with critics insisting the couple had harassed peaceful racial justice protesters, while supporters argued they were merely exercising their Second Amendment rights on their own property.

Despite entering guilty pleas, the couple has remained unapologetic in public comments, with Mark – who has since launched a US Senate campaign – even saying he would “do it again.”

“Anytime the mob approaches me, I’ll do what I can to put them in imminent threat of physical injury because that’s what kept them from destroying my house and my family,” he said.

Both Mark and Patricia were admitted to the Missouri bar in 1986, according to local media. They practice together under the McCloskey Law Center in St. Louis, and reportedly focus on personal injury and medical malpractice cases.