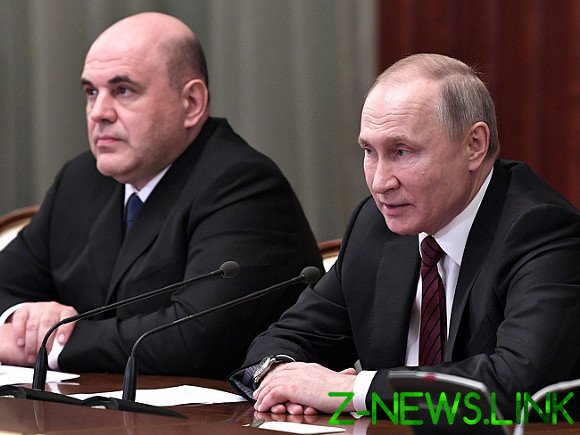 In urgently formed the government of the Russian Federation among new people. Who are they and how will the economic policy of the Cabinet of Ministers?

“The attribution to the former government of Dmitry Medvedev’s liberal economic policies — to put it mildly, a strong exaggeration. Maybe somewhere deep down or in the kitchen, the leaders of the government and adhered to liberalism, but liberal economic policy does not exist, and there was a strengthening of the role of the state, raising taxes, increasing administrative control over the business.

In this sense, I don’t think something will change dramatically, although the first utterance of Michael mishustina inspire potential optimism when he talks about institutional reforms, the reduction of pressure on business, the revival of confidence between business and the government — well, everything that includes the concept of favourable investment climate.

But it should be noted that approximately the same mantra uttered and previous heads of government. In fact everything was moving rather in the opposite direction. Hope dies last, so long as we believe that Mikhail Vladimirovich at least some portion of their advances to perform.

But I can also say that the appointment of first Deputy Prime Minister a former student of mine at the economic-mathematical school under Moscow state University Andrei Belousov, rather, suggests that it is possible to assume a policy of strengthening the role of the state and increasing the tax burden. At least, he has repeatedly spoken in this direction. While taxes, as we know, increased by all — ranging from the population to large business. But the last known initiative of the Belousov on the increase in the tax on commodity and oil companies — is eloquent enough. He’s probably this idea will be developed further. He is a supporter of economic growth through increasing government spending and investment. Well, in order for them to build, if you are not willing to reallocate the priorities of the state, it will have just to increase. So we certainly do not have a lower tax burden.”

“I would note the appearance as the first Deputy Prime Minister Andrei Belousov and the fact that it remains on a post of the Minister of Finance Anton Siluanov. This suggests that within the government will be pretty intense discussion about the main macroeconomic indicators, the importance of storage at the proper level, said Vladimir Putin. So, I think that there will be a competition of ideas, especially because the discussion even with the Central Bank regarding rates, the exchange rate, all of these indicators that are important to the President.

Now the government will have a certain preparatory period. I think it will be long: in its composition the government is quite mixed. It came people of different elite groups and with different approaches in economic and social spheres.

As Deputy Prime Minister for the social sector remained Tatyana Golikova, then it will be an additional workload. Will be, probably, from other members of the government ideas and proposals, and hence there will be a discussion and social sphere.

The main question that now stands before the government, — edit projects. Anton Siluanov said that adjusted all the projects, not just the two mentioned by the President in his address to the Federal Assembly. Accordingly, the order — until February 20, the Ministry of economic development to prepare the edit. So there will be an intensive month of controversy and debate in the government, and probably then at the end of this month it will be possible to pre-imagine what direction — conservative, liberal — adheres to the government”.

“I suspect that the new government, according, at least, and his Prime Minister Mikhail mishustina, is ultra-liberal government in spite of the authoritarian political system. Is based on what my opinion is? Well, first, the new Prime Minister the first thing I did malozamechennyj all the statement that he intends to protect the rights of owners before they are the workforces. Such harsh statements since the Gaidar we haven’t heard from neither Kiriyenko nor from the Minister Kasyanov.

Secondly, in the interview, he very clearly gave to understand that he intends to fully exploit this source of replenishment of the Treasury, as the taxation of real estate. By the way, his doctoral dissertation focuses on the taxation of real estate. That is not a random thought, this is the position. Well, actually, in our country — the poor, and, strictly speaking, under this condition anything to remove over shoot — what the business that hired workers is almost impossible, just not why. We also have the country’s low labor productivity, and labor productivity to increase incomes, then they will have something to take, is also impossible. And, on the other hand, in our country there are enough unique resource — the universal possession of the property.

Everywhere in the West the majority of the working population live in rented — in one form or another — housing. We have the same after Yeltsin’s privatization of even very poor families own some kind of property — whether apartment building or a cottage on six acres. And these sites have people in fairly large numbers, because the population is not growing and people still get the inheritance. This properly taxed base, able to give a very substantial increase in the budget. However, the economy will not grow, rather the opposite. It will be a purely fiscal manipulation.

If you look at the personnel of the government, we will see that in the real sector is one Marat Khusnullin, Builder, notorious in Moscow. And all the rest — Fiscals. Managers, accountants, lawyers. That is, the people involved in your life monetary management, issues of redistribution, not production control, not a question of productivity or growth of the industrial potential.

As for attention to the new first Deputy Prime Minister Andrei Belousov, I could not imagine who would allow him to pursue an independent economic policy at variance with those of the entire Cabinet, and President. No “neo-Keynesian” policies it will not hold. There are no prerequisites, there is no base — nor the personnel, nor the legislature, nor any else.

“Regarding the composition of the government is possible to make any conclusions, but it does not play any role, because the government is made clear — and I think they were sincere in it, will continue the course of the previous Cabinet. Some subtleties can be very interesting to specialists but to the General public are irrelevant.

The main course will be continued, and what was done during Dmitry Medvedev, will be done under Mikhail Mishustin, with the only difference that will be strengthened the line on “digitalization of the economy,” and in fact — to impose taxes, “gray sector” is, quite simply, take from the people the money that people somehow still managed from the state to hide.

When we say that people evade taxes, they forget vital things. The population itself is not evading taxes, and put in a position the tax system. The system is irrational, and, in particular, involves a very high social charges for low wages and low, regressive fees high. Accordingly, employers will send 90% of workers in the grey scheme, and the staff here has no freedom of choice. In other words, if people evade tax, in particular, because employers think it is inevitable that the tax system is so streamlined.

If now all to try to make this part to be legalized, the consequences will be catastrophic for the population. And not the fact that this something will improve dramatically in the economy, especially since the budget we have and so suffers from a terrible, unprecedented and pathological surplus.

But you can think that taking money from the public will become more active, efficient and cruel.”