Home / policy / Minsk before the presidential elections in Belarus: the opposition and the “death squads” Lukashenko 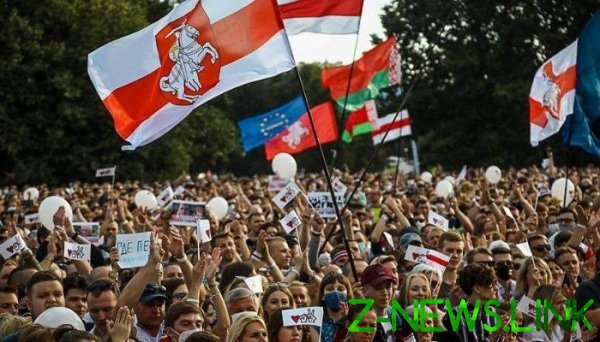 “Elections “stolen”, but people won’t stand for it, and it works out, it’s our last chance”

Presidential elections in Belarus will take place only tomorrow, but in the moment it is clear that their result will be a historic event not only for Tatarstan but for the whole of the CIS as a whole. Correspondent Znak.com walked through the streets of Minsk and talked with its residents about what they expect from tomorrow.

Over the past weeks the streets of the capital to literally exude energy of fast change: from the Windows hang white-red-white flags of flags (one of the historical national character of the Belarusians, the official flag of the Belarusian people’s Republic 1918-1919, in 1991-1995 — the national flag of the Republic of Belarus. Now it is a symbol of the opposition — Znak.com). The roads followed by long columns of cars beeping from the machines outstretched hand, in characters “Love” and the fist. So greet each other with supporters of the opposition candidates United among themselves. 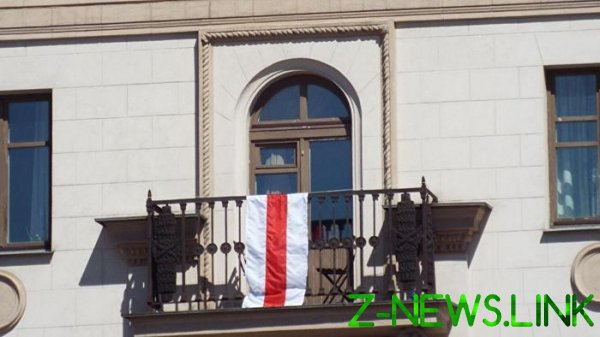 Also a symbol of the Belarusian protest was familiar to veterans of the Russian white ribbon protests. After nearly 10 years in Belarus it has transformed from a ribbon on the chest in white bracelet on the wrist and has gained immense popularity among the residents of Minsk.

But the protest against the incumbent President Alexander Lukashenko, who has been in power for 26 years and now is running for a new term, is not only relentlessly beeping automobile columns: Minsk ply huge column of hundreds of cyclists. Young people on bicycles handing out dozens of ribbons to passers-by who are happy to wear them and then raise their arms in solidarity with protesters c.

Speaking about the reasons of such behavior of people answer that they support the protesters for a variety of reasons. 27-year-old resident of Minsk Maxim, the seller of one of the markets, the question of the relation to elections and prospects, said: “for some reason, so it turns out that many women don’t want in power was a woman (the main competitor to Lukashenko in the elections — Svetlana Tikhanovski, which went to the polls after the arrest of her husband, who was also a candidate, and managed to rally all opposition, — Znak.com). This is how it was with Margaret Thatcher. But the fact that everything must change, it’s obvious”. According to the young man, it is wrong when one person is in power for over 25 years. 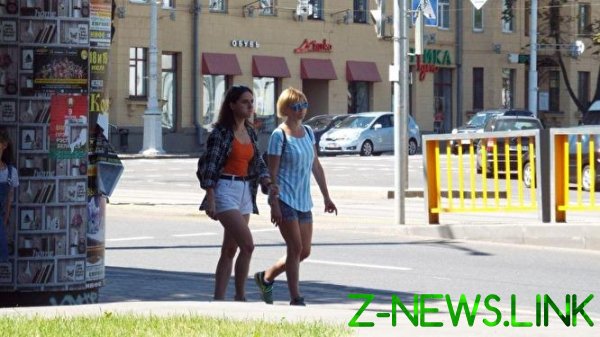 “What is it like to sail on the old boat. It still floats, but we all know that sooner or later it will sink, and patches to put is nowhere. In addition, a person (Alexander Lukashenko, — Znak.com) can not and does not want to hear people”, — said Maxim and adds: “the Fact that the elections “stolen”, no one no doubt, but people won’t stand for it. It works out, it’s our last chance.”

Another passerby, an elderly man of about 70 years, expressed that he sees no need to change anything, as I am sure that Lukashenko was able to save all the plants and agriculture: “I Have a son, he’s 47 years old, live in Ukraine, every time we talk to him, he said that they have a collapse, there’s nothing left”. To the question about the attitude to protest pensioner said he believes the ability to protest threat. “What they drive, honk their horns, are on the road, it’s all the oversight authorities,” he said. On the question of what authorities, the man says, “Yes, Yes, Lukashenko. Nothing Lisp with them. Went on the road, got up to go do not give — to deny rights, and to prevent let will sit, will think if I forget about 90 years.”

However, not all older people hold the same views. According to the pensioner Galina, which managed to talk to one of the parks of the city of Minsk for all my life, she sees such excitement for the first time. 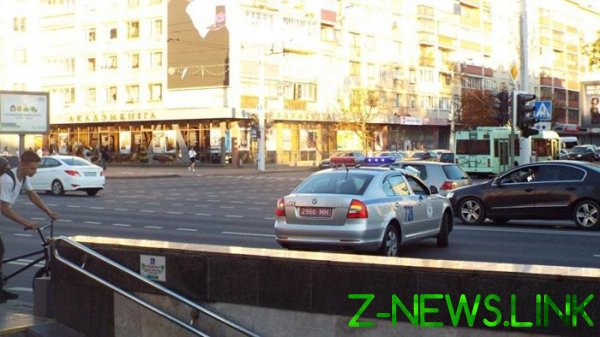 “So much hatred for Lukashenko, as now, had never happened before. He is not very smart is, he escalates the situation. Why he was arrested by Babariko (banker Victor Babariko arrested along with his son Edward, and charged with withdrawals Bank Znak.com), the only candidate who didn’t want to was all bad, and was hoping that people became a little bit better. My mother, when we spoke to her, saying, “Well, Obama’s gone, maybe him as well? He stayed President, and back again.“ And I answered her: well, Obama’s work is, and Lukashenko in his home state farm does not want”, — joked the woman.

In her opinion, Lukashenka because the elections will not go: “I Think, rather, the physiology will do the trick. Only to live up to this won’t work for everyone. It is rightly said about their fingers turning blue…”. 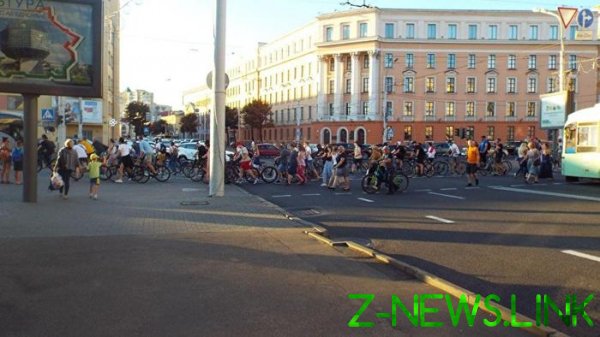 The most radical mood traditionally among taxi drivers (note, among the beeping in support of the opposition machines are often found Uber cars and “Yandex.Taxi”). As stated in an interview with Znak.com one of the drivers Yandex.Taxi Eugene, he lived in Poland for four years and returned to Belarus because of the coronavirus. “When I live in a country where people are all the conditions, and the average salary is calculated by a four digit number in euros, for the return just don’t understand how that is paid, it is possible to live, — said the young man. — It is true, the edge here, stagnation, shovel, absolute collapse, with each passing day it becomes worse. We are from Minsk have all the doctors gone. Work in neighboring Poland, someone in Lithuania, someone in the Czech Republic. And who can afford to be treated in Europe? Only those who sit in the government. But even here the prices in shops are almost Moscow, Minsk salary average of $ 400, 450, but that’s if you’re lucky. But for 30 years no shit has not changed. But we say, look, but we have plants working. Only what they produce, no one in Belarus does not know anyone up there don’t care” — emotionally said the driver.

To the question about what will happen in the elections, Eugene replied succinctly: “There will be (bad word, indicating a complete nightmare Znak.com)”. But elections, according to him, means nothing, is the worst that will begin after. 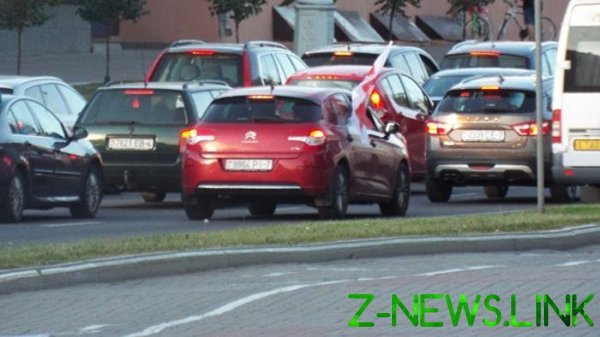 “It will definitely be the bloody crackdown, — said the young man. In the best case, will use water cannons and rubber bullets. And in the worst scenario — something more serious…,” suggested the taxi driver. To the question whether he is afraid that protests can emerge a third force that decides to stage a coup, Eugene replied that he considers this possibility unlikely. “Well, it caught vagnerova your type, I do believe that this is all an act. Why Putin someone here to send, we do for him and so his, Lukashenko and so around it constantly spinning. I don’t think that any exacerbation is necessary to someone, — he said. And generally, if to speak directly: I am a patriot of the planet Earth, we should all live in peace”.

After these words the young man made his hands white bracelet and gave it to the journalist Znak.com.

In the evening on the streets of Minsk slept in the heat, parks earned light-musical fountains. After dark, motorists stopped to honk and the city centre was plunged into the usual life.

However, not all. So, on the streets of Minsk left the car with the police, which is popularly known as “punitive”. As a rule, three or four “UAZ-Patriot” and a small black van with tinted Windows. Behind the wheel of cars sit men in uniform, unmarked. Slowly driving along the pavement, the driver and passengers grey “Patriots” with civil numbers carefully studying walking down the street people.

Yesterday evening, the reporter Znak.com I witnessed how several Cars drove past clusters of cyclists. In the window of the first car was visible of the man who was talking on the radio. The “patriots” were passed by people, and then to cyclists approached the van, which jumped four strong men in camouflage, berets and masks, who tied up standing in the company of young people and threw them into the van. Thus appeared the detainee and a young man who was shooting everything on the phone.

As told our newspaper friends of detainees is a common practice. All caught charged with an article for participation in uncoordinated actions and imposed a fine of 300 rubles, after which almost all released. Young people say that such a situation all used to, and after each detention the next day comes more people: someone even takes bicycles to join the protest. Friday’s action velepromet was a record, as, according to participants, it was attended by about 1,000 people.

Meanwhile, tomorrow, on election day, representatives of the official Minsk to advise people not to go outside: “There will be turbulent”.