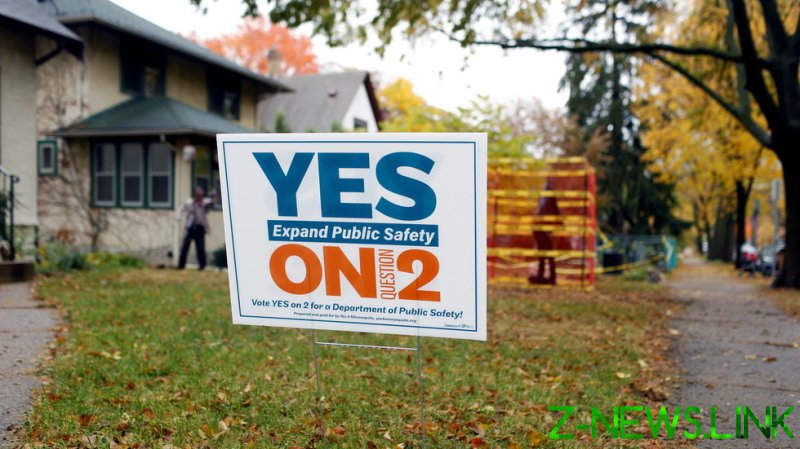 Minneapolis is holding municipal elections on Tuesday, with the post of mayor and city councillors being contested. The poll has been somewhat overshadowed by Question 2 on the ballots, however, which asks citizens to help decide the future of the city’s embattled police department.

It proposes replacing the department, which is enshrined in the city’s charter, with a brand-new department of public safety. According to Yes 4 Minneapolis, the group that launched the initiative, the proposed move does not amount to the abolition or defunding of the police. Instead, the new structure would “take a public-health approach to safety” and include police officers, rebranded as “peace officers,” if deemed “necessary.”

If a department of public safety is created, active-duty law enforcement officers would be “relocated to that expanded container, allowing for other types of professionals, experts and strategies in crisis response and violence prevention,” according to Yes 4 Minneapolis.

Opponents of the proposed reform have criticized the vague terms in which the new department has been described, arguing that it was unclear how it would actually function.

The initiative has also caused a split in opinion among the city’s senior officials and Democrat figures, with Mayor Jacob Frey, who is up for reelection on Tuesday, Police Chief Medaria Arradondo, Senator Amy Klobuchar, and Minnesota Governor Tim Walz all opposing the proposal. The state’s best-known progressives, however, including Representative Ilhan Omar and Minnesota Attorney General Keith Ellison, who oversaw the prosecution of police officer Chauvin for Floyd’s murder, support the idea.

Given the rather scant opinion polling, it’s hard to predict whether or not the initiative will be passed. According to a poll commissioned by local news outlets in September, voters were split roughly in half on replacing the existing police force with a new structure. Some 49% of respondents favored the idea, with 41% opposing it and others undecided. At the same time, 55% of those polled said they wouldn’t want the size of the force to be reduced, and just 29% stating that they did.

Minneapolis, a city of some 430,000 residents, became the ‘ground zero’ of the Black Lives Matter protests held across the US last year. The months-long unrest was triggered by the death of George Floyd at the hands of police officers, who were called to the scene by a shop clerk who suspected Floyd of using a counterfeit $20 bill. In June, Chauvin, the primary culprit in the murder, who had been filmed kneeling on Floyd’s neck, was sentenced to 22 and a half years behind bars.