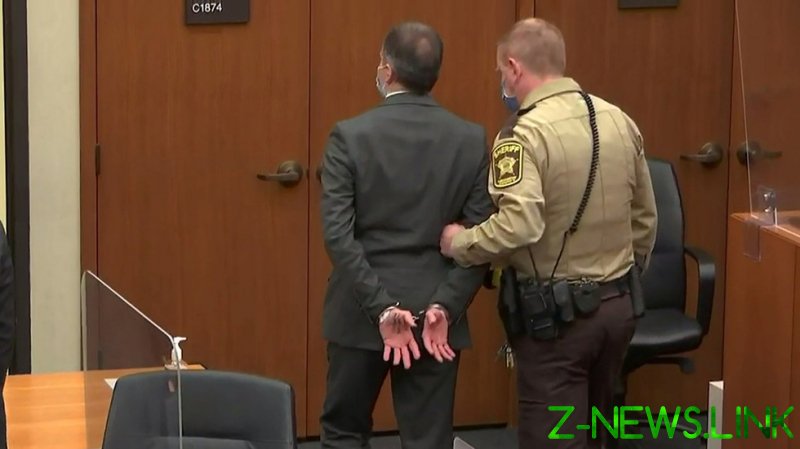 Chauvin was charged with second-degree unintentional murder, third-degree murder and second-degree manslaughter after Floyd died on May 25, during an attempt by six officers to arrest him for allegedly passing a counterfeit bill at a Minneapolis grocery store.

The jury found him guilty on all three counts on Tuesday afternoon.

Following the verdict, Chauvin’s bail was revoked and he was ordered back to jail. He was immediately taken into custody by Hennepin County sheriff’s deputies and led out of the courtroom in handcuffs.

Prosecutors argued Chauvin kept his knee on Floyd’s neck for several minutes, which led to him asphyxiating. Chauvin’s defense argued that Floyd had a fatal dose of the drug fentanyl in his system and that the autopsy found no signs of choking damage.

The jury withdrew to deliberate on Monday afternoon, after both sides presented their closing arguments. Public officials – from Minneapolis Mayor Jacob Frey and Congresswoman Maxine Waters (D-California) to President Joe Biden himself spoke of the need for the “right verdict,” while activists threatened more riots should Chauvin be acquitted.

Between the statements from public officials and the corporate press publishing as many details about their identity as they could – and the knowledge their names will be made public after the trial – the Chauvin jury found itself under tremendous pressure to convict.

According to the Minneapolis Star-Tribune, the final jury consisted of two multi-racial women, three black men, a black woman, four white women and two white men. Two more white women were alternates, and were dismissed after the closing arguments on Monday.