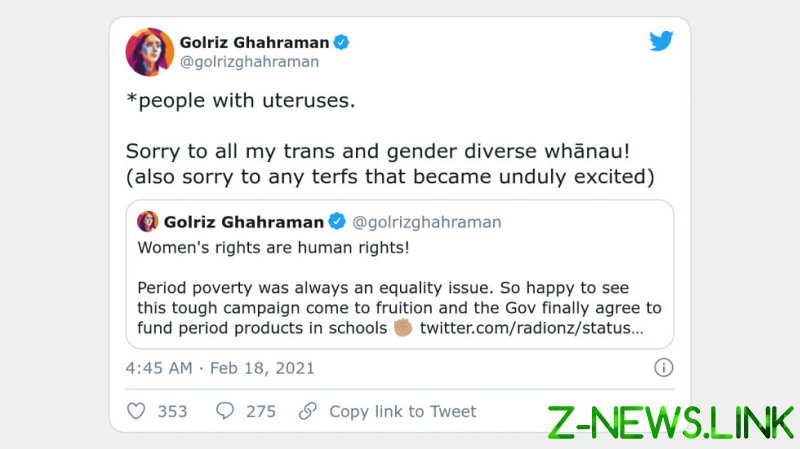 While nobody would argue that the news wasn’t good, some commenters picked on the motto itself, saying Ghahraman should have said “people with uteruses” instead. Others welcomed her for not shying away from the word “women,” but they were soon disappointed, as the MP corrected herself.

“Sorry to all my trans and gender diverse [supporters] (also sorry to any terfs that became unduly excited),” she added, apparently equating the use of “women” in the context with being a hateful transphobe. TERF stands for “trans-exclusionary radical feminist,” but has long become a slur word thrown around by pro-trans activists.

Ghahraman’s swift self-censorship is hardly surprising. A long-time champion for minority rights, the Green Party of Aotearoa New Zealand has recently experienced somewhat of a schism between the feminist old guard and a new wave of activists focusing their advocacy on the trans community.

Exemplifying the conflict was a 2019 article penned by Jill Abigail, who complained that the party’s push towards things like giving male-bodied trans women unfettered access to women-only spaces was rolling back the hard-won progress made over the years by people like herself.

“Feminists who have worked for decades to achieve the rights now enjoyed by younger women are being vilified,” the then-80-year-old politician wrote, exactly predicting the reaction to the article.

The piece was condemned by many members of the party, including co-leader Marama Davidson, as an example of transphobic hate speech. Some people reportedly resigned or threatened to resign from the Greens in protest. The party’s newsletter Te Awa, where Abigail’s opinion was published, apologized and removed it.