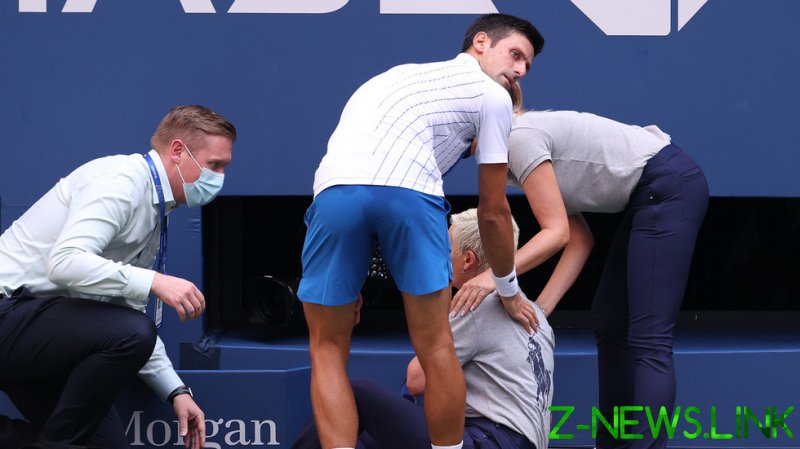 Novak Djokovic is in the headlines again because of his Australian Open vaccine exemption row – but as we explain, this isn’t his first rodeo in a career filled with controversies.

Disqualification from the US Open

At Flushing Meadows in 2020, Djokovic was disqualified as he trailed Pablo Carreno Busta 6-5 in the first set of their fourth-round meeting.

Smacking a ball behind himself in anger, Djokovic hit the line judge in the neck and had a 29-match winning streak brought to an abrupt end in shocking fashion.

Holding his hands up later, Djokovic admitted at a press conference that he was in the wrong but couldn’t “promise” or “guarantee” that “I will never ever do anything similar to that in my life.” 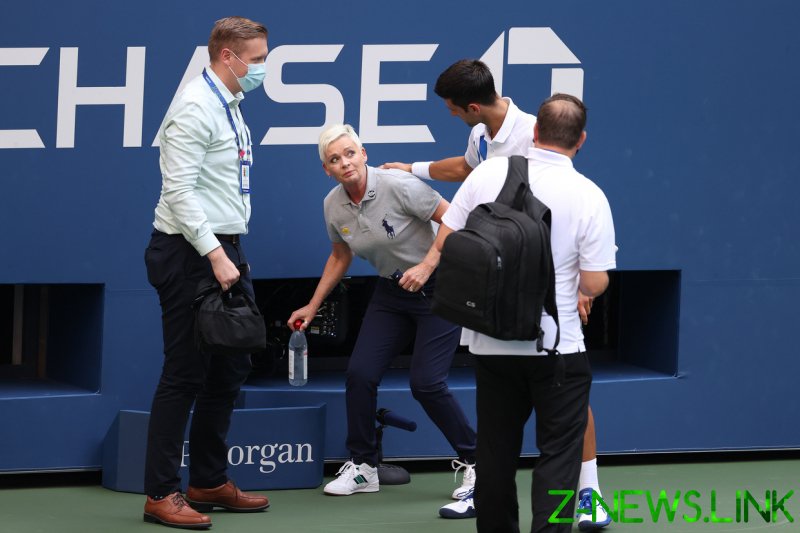 Djokovic hit the judge before being kicked out of the US Open. © Getty Images

On Instagram, though, Djokovic took on a much more contrite tone and claimed that “this whole situation has left me really sad and empty”.

“I‘m extremely sorry to have caused her such stress. So unintended. So wrong. I’m not disclosing her name to respect her privacy,” said the star.

The final of the tour stage in Zadar, Croatia, between Djokovic and Russia’s Andrey Rublev then had to be scrapped after Dimitrov contracted Covid, and meant that the remaining three legs of the tour in Montenegro and the Bosnian cities of Banja Luka and Sarajevo also needed to be shelved.

On June 22, one of Dimitrov’s opponents, Borna Coric, announced that he had tested positive for Covid, as did Troicki and his pregnant wife Aleksandra hours later.

The following day, Djokovic and his own spouse Jelena followed suit, which forced Nole to issue an apology and say he was “so deeply sorry our tournament has caused harm” on Twitter.

While it has finally been confirmed by court transcripts during his Australian visa row that Djokovic is unvaccinated, his views on the matter were already being aired around the same time as the ill-fated Adria Tour.

A message in a private Facebook chat between Serbian tennis players saw him state he was against vaccination, and Djokovic then invited wellness guru Chervin Jafarieh as a guest to one of his ‘Self Mastery Project’ sessions on Instagram Live, where the health benefits of positive emotions, such as purifying water, were discussed.

“Because water reacts and scientists have proven that. That molecules in the water react to our emotions, to what is being said.”

By one reporter, he was slammed for continuing “to give his big platform over to some truly nutty pseudoscience blabber”.

Aside from the line judge incident, Djokovic has found himself accused of other instances of unacceptable behavior in matches down the years.

In 2019, he smashed a racket to smithereens by hitting it into the ground at the Monte Carlo Masters. In the same match, he then lobbed another racket at the ball that sailed into the stands and narrowly missed fans.

A month later, two similar incidents occurred at a competition in Rome, which is where he also smashed his racket at the Italian Open in 2020 less than a fortnight after being kicked out of the US Open.

“Well, let me tell you it’s not the first nor the last racket that I’ll break in my career,” Djokovic admitted. “I have done it before, I’ll probably do it again,” he predicted, and this proved to be true. 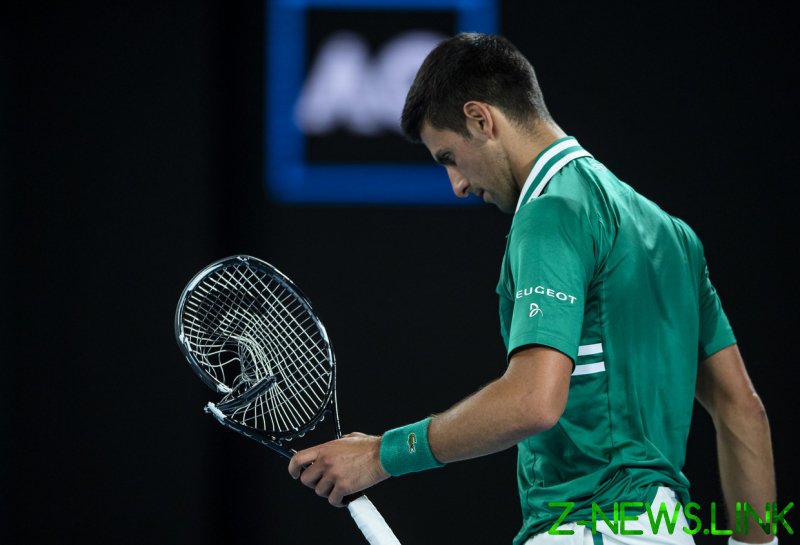 Djokovic has indulged in his fair share of racket-smashing down the years. © TPN/Getty Images

The same city saw a “disgusting” meltdown in May last year, and in September, he again took his anger out on his equipment when facing Daniil Medvedev in a final he eventually lost to the Russian when missing an opportunity to level up after falling a set behind.

Indeed, there is a lengthy YouTube compilation devoted to Djokovic racket smashes made in 2019 that doesn’t even feature some of his most recent exploits such as hurling his racket into the empty stands at the Tokyo Olympics.

Less red mist and more dark arts, Djokovic has also been accused of feigning injury as far back as the 2008 US Open, where he took two timeouts against Tommy Robredo.

This caused Andy Roddick to mock him for overcoming “two hurt ankles” plus back and rib injuries, “a cramp, bird flu, anthrax, SARS, common cough and cold”.

“He’s either quick to call the trainer or he’s the most courageous guy of all time. It’s up for you guys to decide,” the American added. 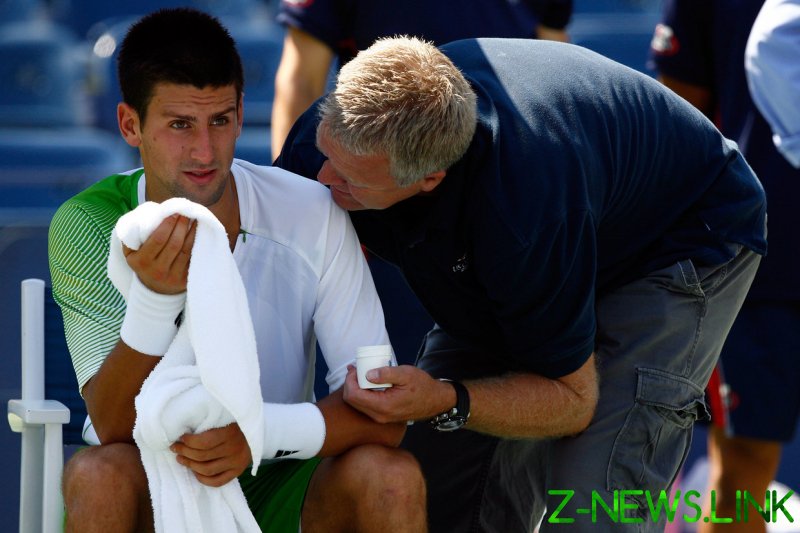 Djokovic took timeouts against Robredo back in 2008. © Getty Images

In the 2015 Australian Open final against Andy Murray, Djokovic stumbled after losing points which the beaten Scot later claimed was “frustrating”. “I got a bit distracted when he fell on the ground,” he said, asserting that Djokovic’s injuries were “not legitimate”.

The following year, commentator Patrick McEnroe branded another of Djokovic’s medical timeouts a “complete abuse of the rules” and accused officials of not having “the guts” to address the issue with the trend apparently continuing as recently as the 2021 Australian Open.

In the third round, against Taylor Fritz, Djokovic went two sets up and then broke down with what he later protested was an abdominal muscle tear as the Californian leveled. Managing to recover, Djokovic then went on to win the match and the tournament a record ninth time, as it now remains uncertain whether he can make that 10 in 2022.