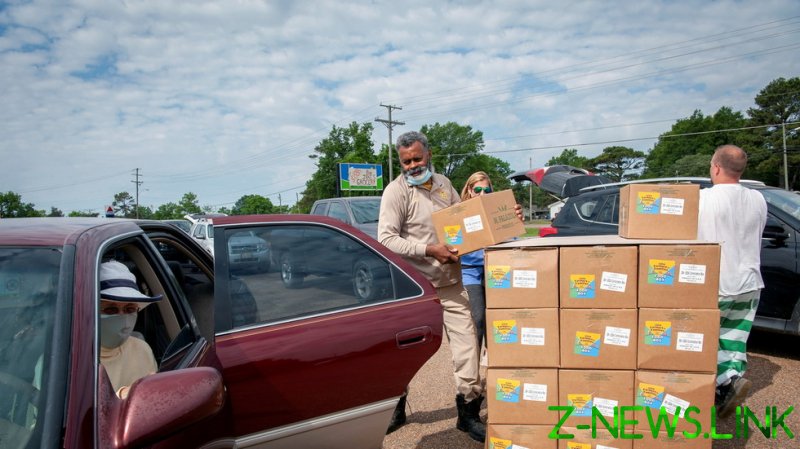 An estimated 11.4% of Americans, or around 37.2 million people, lived below the poverty line in 2020, up from 10.5% the previous year, the US Census Bureau said on Tuesday. Median household income dropped 2.9% to $67,521 a year, marking the first statistically significant decline since 2011.

US poverty had been trending downward for five straight years, including the first three years of President Donald Trump’s administration, and reached the lowest level in six decades of record-keeping in 2019. But those gains fell by the wayside as states shut down businesses in an attempt to slow the spread of Covid-19.

In just a four-week period in March and April of 2020, about 26 million Americans lost their jobs, exceeding the 22 million jobs that had been created since the economic collapse of 2007-2009. For all of last year, the number of full-time workers tumbled by about 13.7 million, the largest such decline on record, the Census Bureau said.

The average US poverty threshold for a family of four last year was a yearly income of $26,496. An estimated 14.8% of American families with children, or 5.6 million households, had food insecurity in 2020, up from 13.6% the previous year, according to the report.

However, the Census Bureau noted that when government handouts were factored in – including Covid-19 stimulus checks and supplemental unemployment benefits – fewer Americans were actually living in poverty. The so-called supplemental poverty measure (SPM) fell to 9.1% in 2020 from 11.7% in 2019.

In fact, the economy was so reliant on government checks last year that the SPM was lower than the official poverty rate for the first time in history. The SPM also includes necessary expenses – such as taxes, health insurance premiums and childcare costs – so it’s normally higher than the standard poverty measure.

With the federal government essentially paying millions of people to stay home in 2020, the US national debt ballooned to $19.6 trillion. Put another way, from the country’s founding through 2019, Washington accumulated $16.8 trillion in debt, but it took just one year to add another $2.8 trillion.

And now that the supplemental jobless benefits and stimulus checks have run out, the US economy remains 5.3 million jobs short of where it stood before the pandemic began.

A decade on from enactment of Obamacare, 28 million Americans had no health insurance coverage in 2020, the Census Bureau said. An estimated 91.4% of US residents had coverage for at least part of the year.