Home / WORLD / Millennials can’t afford property so don’t care about protecting it. Why are we surprised they’re setting fires and smashing cars?

Millennials can’t afford property so don’t care about protecting it. Why are we surprised they’re setting fires and smashing cars? 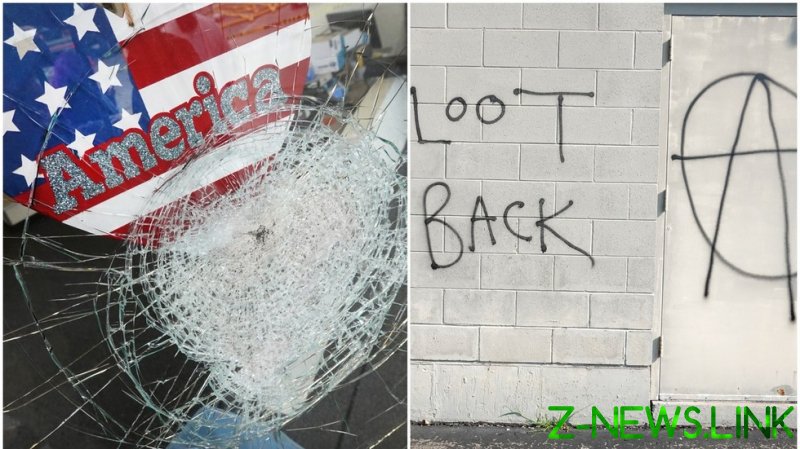 Video footage of a Kenosha, Wisconsin man trying to impart respect for private property to a group of young protesters has gone viral, mostly among conservatives who hold it up as proof the kids flooding the streets to smash windows and set things on fire are spoiled brats who’ve never worked a day in their lives. That self-serving reading is only half the story, however: while owning a home and business remains the American Dream even for young adults, many of them are finding that, just like any other dream, it vanishes when they wake up.

“What y’all don’t f***ing understand is that people have their lives in these businesses,” the exasperated man tells the younger protesters in the video, posted earlier this week to social media.

“We pay for this!” one of the protesters, a young woman who looks barely out of high school, shouts back, while the man vainly attempts to draw a distinction between private businesses and the police who paralyzed Jacob Blake, reigniting tensions over racism and police brutality that have polarized the nation since a white cop killed black Minneapolis resident George Floyd in May.

“Are furniture stores the police? Are car dealerships the police?” he insists, before he’s finally chased off as the woman promises, “We’ll burn your stuff down, too!”

Most who see the video sympathize with the man, who comes off as a defender of the quintessentially American value of private property. But when fewer Americans than ever can afford to own a home, can young people be expected to uphold a value that doesn’t apply to them?

Like most cliches, the “Antifa protester living in Mom’s basement” trope contains a grain of truth. More millennials live with their parents than with a romantic partner – the first generation in over 150 years to forsake ‘leaving the nest’ in favor of moving back in with Mom and Dad. The trend is only growing: the percentage of young adults living with their parents has more than doubled since 2000. And the Covid-19 economic shutdown has forced even more newly unemployed young adults to retreat to the safety of their parents’ basements.

But this isn’t necessarily because they’re too lazy to pull themselves up by their bootstraps. Many work – or worked, pre-pandemic – multiple jobs, struggling under crippling student loan debt, often emerging from the college education they were told would open the door to professional success only to find all the good jobs have been taken and their law degree has merely prepped them for waiting tables at Applebee’s. They don’t qualify for a mortgage or even a rental apartment – landlords generally demand tenants make 40 times the monthly rent – and thus moving back in with their parents is their only option.

Even young adults who live on their own are much more likely to rent than own. While some commentators have tried to spin this as young people not wanting to be tied down, it usually boils down to simple poverty. Nearly three-quarters of millennials believe home ownership is a “top priority” – they just can’t afford it. And a growing proportion have become resigned to the fact that they’ll “always rent.” Do those who condemn millennial living habits genuinely believe that, given the opportunity to not turn over more than a third of their monthly salary to a parasitic landlord, they wouldn’t take it? 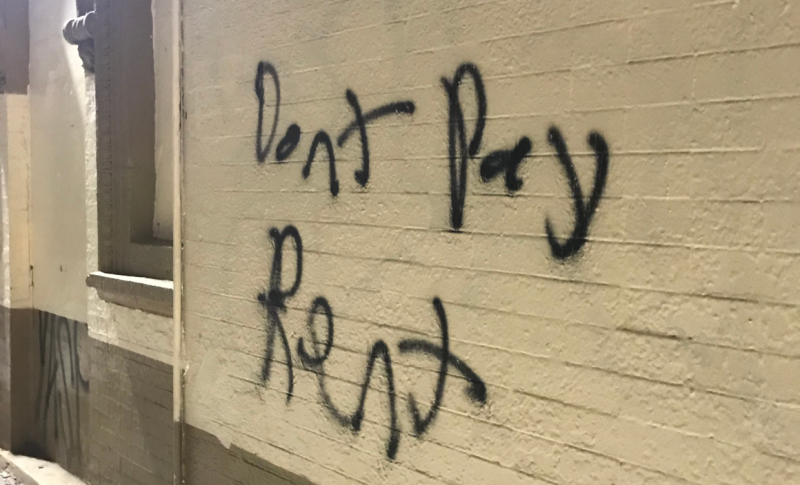 Anti-rent graffiti as seen in Bushwick, Brooklyn © the author

One need only look at the popularity of the Cancel Rent movement – support for which can be seen scrawled all over the walls and sidewalks of New York City and other large urban areas – to dismiss the notion that young people are renting because they like it. The vast majority of people, given a choice, would prefer shelter that can’t be yanked out from under them for a few months’ nonpayment – although, as the 2008 foreclosure crisis proved, even home ownership isn’t a fail-safe against being unceremoniously thrown out on the street.

With no hope of property ownership in their future, and banks and landlords still circling like vultures eager to pick off whatever earnings they can, it’s no surprise so many young people care little for protecting private property. When they know they’ll never be able to afford a home, what’s barging into a gated community? Who cares about torched cars at an auto dealership when one will never be able to afford a car? Communism and kindred ideologies are calculated to appeal to the dispossessed, which is a description that – despite the US’ increasingly unrealistic self-image as the Land of Opportunity – fits the country’s younger inhabitants to a T.

Especially after the ill-advised pandemic shutdowns put millions out of work who were already barely hanging on, young Americans are painfully aware they have no future in the system. So, why not smash it up?

Those property-owners (rightfully!) horrified by young Americans’ utter disregard for private property and the other principles once thought to underpin the nation must admit that most of them turned a blind eye while entire generations were deprived of the American Dream they’d been promised. No, the American Ripoff doesn’t justify the wholesale arson and property destruction that have been unleashed in the wake of the George Floyd protests. But try telling that to someone who’s tens of thousands of dollars in debt, with no opportunity to climb out of the hole, and now forbidden to work by nonsensical government diktats that are killing more people than the virus they’re supposed to combat.

The US must either dramatically reverse the ‘trickle-up’ economy that has given a handful of wealthy people control of more wealth than the bottom half of the population or come to terms with its imminent destruction. The financiers and corporate bigwigs who’ve hoarded the nation’s wealth have forgotten the cardinal rule of the parasite: thou shalt not kill the host. The American gravy train is about to derail, and it’ll be their own fault when it does.