Militants in the Donbas 14 times fired at the Ukrainian positions: wounded military 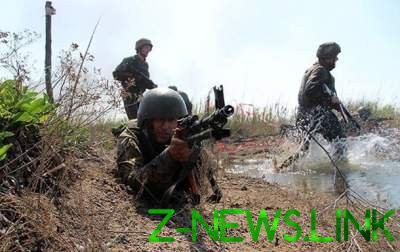 In the past days, separatists in the Donbass 14 times violated the ceasefire, injuring one Ukrainian soldier. On Friday, may 10, the press center of OOS.

It is noted that the illegal armed groups twice when the use prohibited by the accords of 120 mm mortars. Also the attacks were carried out with weapons of infantry fighting vehicles, rocket-propelled grenades of various systems, heavy machine guns and small arms.

“As a result of shelling, one soldier of the United forces were injured. For each attack the opponent received the adequate answer”, – added in OOS

According to intelligence reports the joint forces may 9, one enemy was wounded.

Since the beginning of the day on Saturday, may 10, attacks of the Ukrainian positions by the enemy is not fixed.