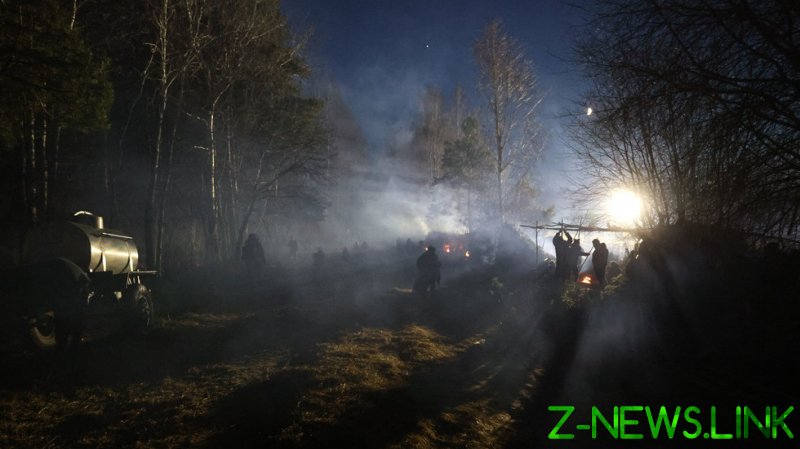 Speaking at a meeting of ministers in Minsk on Thursday, Lukashenko “noted that a dangerous pattern has emerged whereby there are attempts to transfer weapons and ammunition to migrant encampments on the border with Poland to provoke a conflict,” an official statement reads.

According to the Belarusian leader, the guns, which are apparently intended to reach Kurdish refugees hoping to cross over into the EU nation, originate in the war-torn Donbass region of Ukraine. As well as firearms and bullets, the shipments are said to include explosives.

No evidence has so far been presented to substantiate the bombshell allegations, and Poland has not indicated any concerns about illegal arms-trafficking.

The standoff over the shared frontier has worsened in recent days, with Warsaw declaring a state of emergency and deploying thousands of troops, border guards, and police officers in response to a spike in attempted illegal crossings.

Brussels has said the growing crisis amounted to “hybrid warfare” being waged by Belarus, accusing the country of laying on flights to troubled nations such as Iraq, Syria, and Iran, and encouraging would-be asylum seekers to breach the border. The policy, EU chiefs allege, is retaliation for sanctions levied by the bloc against Lukashenko’s government over last summer’s disputed presidential election.

Minsk says it is simply no longer prepared to stop migrants from reaching the bloc’s borders, and has warned that a new influx of Afghan refugees could be imminent. “The Americans invited [migrants], but ordered Europe and Central Asia to take them in,” Lukashenko explained. “What are people to do? They will go to Europe.”