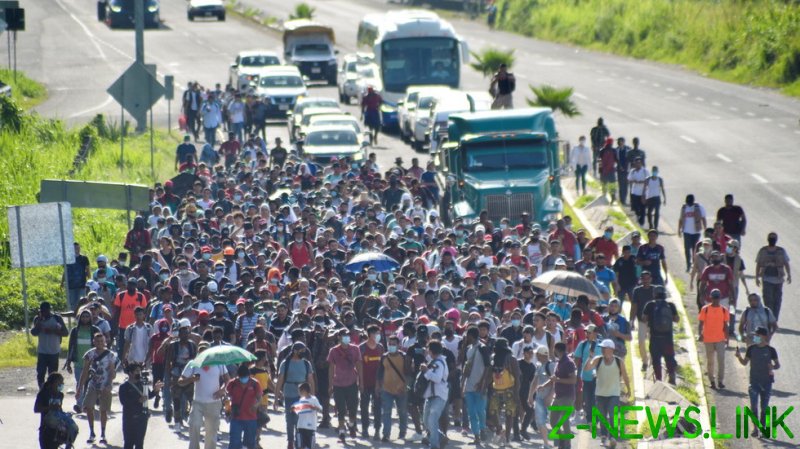 Thousands of migrants gathered in Tapachula, near the Mexico-Guatemala border, and are now making their way to Mexico City and eventually the US border. Among them are people fleeing Haiti, Venezuela, and multiple other Latin American countries.

Department of Homeland Security officials previously stated they were keeping an eye on the caravan as Mexican officials have tried to prevent the group from making its journey. Footage on Saturday of the caravan making their journey on foot hit social media and showed thousands breaking through Mexican law enforcement officials, equipped with riot gear and attempting to build a wall to block the migrants.

People marching in the caravan held signs with messages such as ‘Joe Biden is for all’ and ‘we come in peace’. Some have also carried an American flag with no stars, telling the media following the migrants it means ‘America is for everyone’.

Inrineo Mujica, the reported leader of the caravan, has called on Biden to do more for immigration reform and blamed poor conditions and lack of opportunities in Mexico for the thousands of people that have overwhelmed the US-Mexico border for months.

“What Mexico should do like every country is make sure they do their share… Money is not going to solve the problem, money thrown into governments like Mexico” he told Fox News’ Griff Jenkins. “They [migrants] should be given papers here, the opportunity to work here, because a lot of them don’t want to go to the US because Mexico, it’s a good place to live and to work.”

Migrants have said they are not interested in violent confrontations, despite pushing their way through the Mexican forces on Saturday. While DHS officials have warned that many people will likely be apprehended and then deported, the Biden administration’s approach to the border has come under intense scrutiny since he took office. Border Patrol agents are dealing with record-breaking numbers of migrant crossings, and reports from the border indicate many are released into the US after they are apprehended, with orders to appear in court at a later date.

Detentions of undocumented migrants at the border have passed 1.7 million for the fiscal year 2021, an all-time recorded high.

The caravan and the record-breaking numbers follow Biden’s claim at a CNN town hall this week that he does not have the time to actually visit the US’ southern border, despite the chaotic crisis there and the fact that he has not been there once during his presidency.

“I’ve been there before, I know it well, I guess I should go down,” Biden said about a potential visit. “The whole point of it is, I haven’t had a whole hell of a lot of time to get down.”

“Biden could secure the border and resolve this crisis in a matter of weeks, but instead he ‘doesn’t have time’ to even visit the border of the United States – the United States he swore an oath to protect,” Texas Republican Rep. Chip Roy told Daily Caller about Biden.

Footage of the latest migrant caravan headed to the border has only fueled further criticism of Biden’s handling of the border crisis.