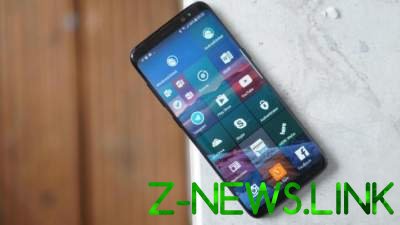 Galaxy S8 Microsoft Edition, which AndroidInsider.ru told last spring, was nothing more than a fiction.

With the corresponding statement was made by the representatives of Samsung Electronics, said that it was not involved in partnerships with Microsoft and did not give its consent to the dissemination of improved versions of branded smartphones.

The official stance of Samsung Electronics lies in the fact that Microsoft was engaged in banal resale Galaxy S8, manually installing them on a branded app. Such action was not sanctioned by the manufacturer, and therefore, believe in Seoul, Microsoft has unpacked sales samples, activated them and uploaded using an unknown user account.

Despite the fact that Microsoft in fact did not produce any manipulations with Samsung smartphones on their own, the fact that the company tried to extend the brand IN this way does not cause anything, except ridicule. Interestingly, models with the mark of Microsoft Edition is sold even cheaper than their prices in the official shops of the manufacturer.