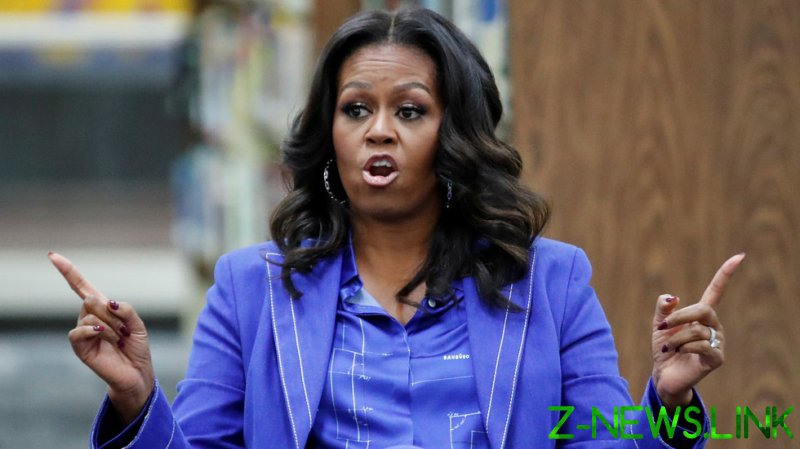 The former first lady digitally descended upon a pair of British girls’ schools she had visited several times while in the White House in order to pass on a flash of questionable wisdom: that Covid-19 should be seen not as a destructive force, or even as a trigger prompting leaders to destroy their own nations, but as “a great blessing.” She shared the disturbingly insensitive doctrine as part of a virtual tour hawking copies of her biography, ‘Becoming’, recently published in a ‘young-reader edition.’

The Covid-19 pandemic and its economic fallout were not a tragedy, but a character-building opportunity, Obama explained, insisting the outbreak provided a chance for young people to push through “something hard and uncomfortable and unpredictable.”

“No matter how high you get, or how smart you are, or how successful, life will throw you things that you’re not necessarily prepared for. And if you know how to get yourself through it, you will succeed,” Obama said, as if filling out blanks in some sort of plug-and-play motivational Mad-Lib (“think outside the [noun]”; “sticks and [plural noun] may break my bones but words will never [verb] me”).

In addition to pushing the dumbed-down version of her 2018 book, Obama filled her young charges’ heads with motivational tripe centering on career motivation, leadership skills, and mentorship – three attributes that have vanishingly little to do with whether one survives a pandemic or not, and indeed are of questionable utility at all in 2021 given the dearth of jobs to be found on either side of the Atlantic.

But then, Obama has never seemed to notice or care about the concerns of normal people, individuals who had plenty of problems before Covid-19 showed up and didn’t need to add more “blessings” to their arsenal. Obama hasn’t had to care about such ephemeral concerns as “jobs” for a long time, and despite her solidly middle-class upbringing, her psychology is more Machiavelli than Dale Carnegie.

The Kindle snippet of the new version of ‘Becoming’ on Amazon.com ends with a chilling window into the future FLOTUS’ childhood, as Obama describes how she preferred to play with her dolls (and borrow her brother’s without asking). A typical childhood play activity takes on an alarming tinge in the mind of the budding megalomaniac: “The point was that the dolls and the blocks needed me to give them life, and I dutifully gave it to them, imposing one personal crisis after another.”

Like her book itself, Obama’s tone-deaf addresses at London’s Elizabeth Garrett Anderson School (EGA) and Mulberry School for Girls packed more cringe per inch than nearly any other celebrity rumination on the virus, outside, perhaps, of Madonna’s affirmation of the universal oneness from her bathtub full of rose petals.

Even Madonna’s absurd chat-to-nowhere pretended the virus was a ‘great equalizer,’ while Obama’s merely propped up the eugenics-tinged reaction exhibited by so many of the wealthy and powerful in response to the virus: one (wo)man’s “great blessing” is another’s culling the “useless eaters.”

And, unlike Madonna, who was lambasted for her attempt to connect with the common man by wasting a perfectly good bathtub full of milk, Obama was hailed for being “positive,” with Jo Dibb, the executive head teacher at EGA, insisting that, “to view the pandemic as something that will help us in the future is a really positive way of looking at things.” With its economy in ruins and close to 150,000 dead with the virus as of Friday, the UK has only just recently begun reopening its economy, and any child watching Obama’s Oprah-esque pandering who wasn’t born with a silver spoon in one orifice or another must surely have wondered what planet she was Zooming from.