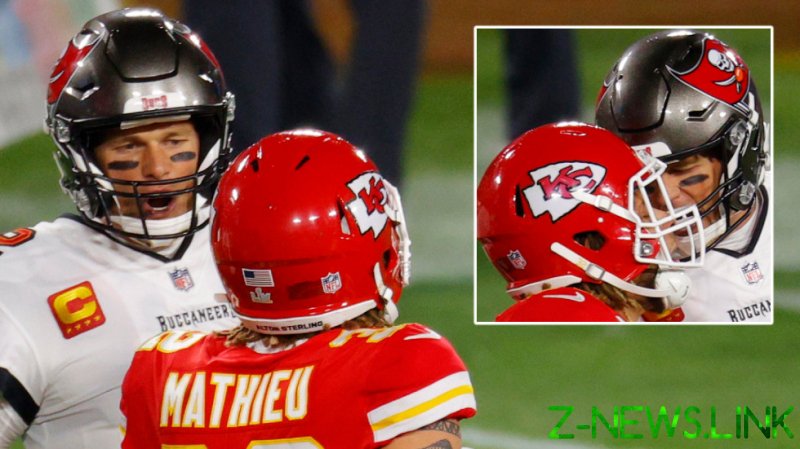 Brady clashed with Mathieu several times as the Tampa Bay Buccaneers quarterback won his seventh Super Bowl title on Sunday, including an incident in which he was caught on film appearing to warn his opponent while gesturing angrily at him.

“Honey Badger” took to Twitter after the Chiefs’ comprehensive 31-9 defeat to claim that Brady had directed a disgraceful insult at him, causing confusion among viewers and rumors that the 43-year-old could have made a racial slur.

“He called me something I won’t repeat,” Mathieu wrote in the now-deleted allegation.

“But yeah, I’ll let all the media throw me under the bus as if I did something or said something to him.

“Go back to my previous games against [him]. I showed nothing but respect. Look at my interviews about him: I show grace.”

Brady sent Mathieu an apology by text in which he called him the “ultimate competitor” and admitted that he had aimed to match his intensity in the game, according to ESPN.

The legendary veteran was also said to have told Mathieu how he had watched him since he broke into the professional game, told him that he wanted to apologize in person and called him an “incredible leader, champion and class act.”

“I think Brady was mic’d up so he can prove it’s a lie,” said one fan amid arguments over Mathieu’s motives for hastily removing his tweet.

“The tweet was bullsh*t,” speculated another. “Brady was mic’d up the whole game so Mathieu realized that and deleted the tweet.”

Asked to elaborate on the row, Brady’s teammate, Antonio Brown, said the trash talk had been a product of “emotions of the game”. “Guys get caught up in the emotion but we got the victory,” he added.

Wide receiver Mike Evans said he had enjoyed the spat. “I don’t know what it does for [Brady] but for the guys around us, we love that sh*t,” he explained.

Brady did not publicly respond to the controversy, while Mathieu replied to a separate tweet about his performance on Monday: “I have lots of haters. Enjoy this one. I know you all couldn’t wait.”