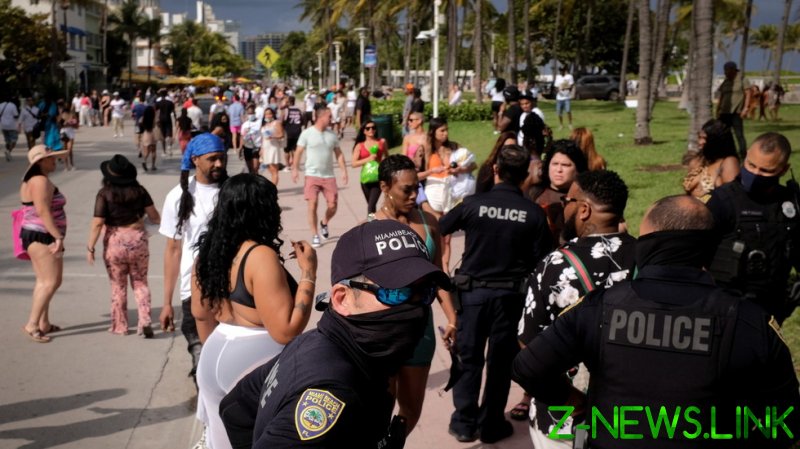 Photos and videos posted on social media show Miami’s beaches jammed with people, none of whom appears to be wearing a mask.

The footage also shows rowdy and dangerous behavior, such as a group of young men brawling in a parking garage on Friday night. Another clip shows scantily clad women dancing in the street and climbing on a police car.

A larger disturbance occurred at 8th Street and Ocean Drive, where a person or persons walked into a crowd and started throwing fake money into the air, causing a mob scene with people struggling to get what they thought were real bills, police said. Police apprehended a 19-year-old man who was throwing money and said that when he resisted arrest and tried to incite a riot, they body-slammed him to the ground and used pepper spray to break up the crowd surrounding them. Two officers suffered minor injuries when people in the crowd threw objects at them.

Some 100 people have been arrested over the weekend, including for drug and weapons offences, city of Miami Beach spokeswoman Veronica Payssé said, speaking to CNN. Police also have issued more than 900 citations and seized 13 guns since Monday.

“We’ve got too many people coming, we’ve got too many people acting out, and we have Covid at the same time, so it’s a triple threat,” Miami Beach Mayor Dan Gelber told the local CBS News affiliate. He added that the city has no interest in hosting people who seek to cause trouble, saying, “It’s not worth the money to us. It’s not worth the revenue, it’s not worth anything. You cannot pay our community to endure the kind of inappropriate and improper conduct that we’ve been seeing.”

The scale of the visitor influx was shown in another video, with traffic Saturday on the Julia Tuttle Causeway jammed in the southbound lanes toward Miami and relatively spars heading north, away from the city. And Miami isn’t alone. Other spring break hot spots, such as Ft. Lauderdale, are attracting large crowds.

Florida Governor Ron DeSantis has touted his state’s success in keeping businesses and schools open during the pandemic while keeping Covid-19 case and death rates comparable to those of states with strict lockdown measures, such as California.

DeSantis not only hasn’t imposed a statewide mask mandate, but also has banned cities and counties from punishing those flouting the regulations.

On Wednesday, DeSantis signed an executive order, banning any county or municipality from fining people or businesses for failing to wear a mask.“I hereby remit any fines imposed between March 1, 2020, and March 10, 2021, by any political subdivision of Florida related to local government COVID-19 restrictions,” he stated in the order.

Author Stephen King blasted DeSantis for his lax policies, quoting Covid-19 as saying, “He doesn’t care how many die or how much I spread around, as long as those tourist dollars keep rolling in.”

However, despite having the second-largest 65+ population ratio in the US, Florida ranks behind 26 other states in terms of per-capita deaths from Covid-19, which kills mostly people 75 and older. Some of the states with far higher death rates, such as New York, New Jersey, Michigan and Pennsylvania, have imposed some of the tightest pandemic restrictions.