Home / business / MFA: among the dead in Genoa Ukrainians there

MFA: among the dead in Genoa Ukrainians there 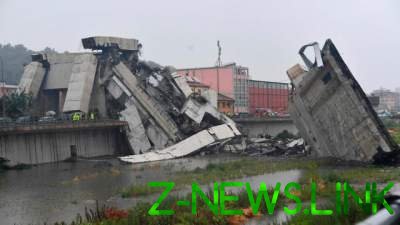 Relevant information was confirmed by the Prefecture of Genoa.

Citizens of Ukraine among the dead people as a result of collapse of the main bridge in the North of Italy in Genoa, no. This is stated in the message of Department of consular service of the Ministry of foreign Affairs on Twitter.

“Prefecture of Genoa reported that among the victims of the bridge collapse there are no Ukrainian citizens”, – stated in the message.

See also:  Ukraine suffered losses over the past day in the area ATO

August 14 in the North of Italy, in Genoa, occurred the collapse of the main bridge Morandi, whose length is over 1 km, height – 90 meters.

The bridge was built in the 1960-ies on West from the city center of Genoa. The cause of the collapse could be a weakening of the supporting structures.

See also:  The Ukrainians were less likely to use Russian sites

As of August 15 confirmed 38 dead, including three children of 8, 12 and 13 years old. Injured 15 people, including nine in serious condition.

Four of them recovered from the wreckage. During the collapse the bridge was 30-35 cars and three trucks.

Tags among genoa: there ukrainians