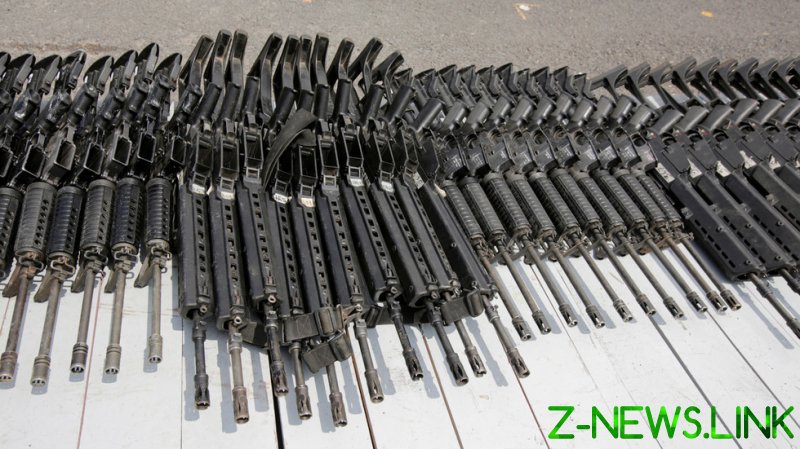 The landmark lawsuit was brought before the US District Court for the District of Massachusetts on Wednesday.

The suit alleges that units of top US gun makers, including Colt, Smith & Wesson, Barrett, Glock, and Ruger, indulged in negligent business practices and knew their activities produced illegal arms trafficking in Mexico. The companies named in the lawsuit produce around two-thirds of some 500,000 weapons illegally brought into the country each year, according to Mexican authorities.

None of the gun makers named in the filing has, so far, produced any official reaction to Mexico’s legal action.

The country is now seeking an eye-watering sum of $10 billion in damages, with the lawsuit not only designed to reap hefty compensation, but also to prompt the implementation of standards to “monitor and discipline” the gun making companies, Mexico’s Foreign Minister Marcelo Ebrard said.

Mexico has endured years of widespread gun violence and record homicide rates. Over 300,000 murders have been perpetrated there since 2006, when Mexican authorities deployed army units to fight rampant drug trafficking and other crimes linked to powerful drug cartels. In 2019 alone, weaponry illegally smuggled from the US was involved in more than 17,000 murders, according to official statistics.

Mexican officials lauded the lawsuit’s filing on Wednesday, expressing confidence the country will win the landmark case. “We are going to win the trial and we are going to drastically reduce illicit arms trafficking to Mexico,” Ebrard told reporters.

The minister also said the state believes the US government, which is not implicated in the lawsuit, is willing to work together with Mexico to curb the flow of illegal firearms.