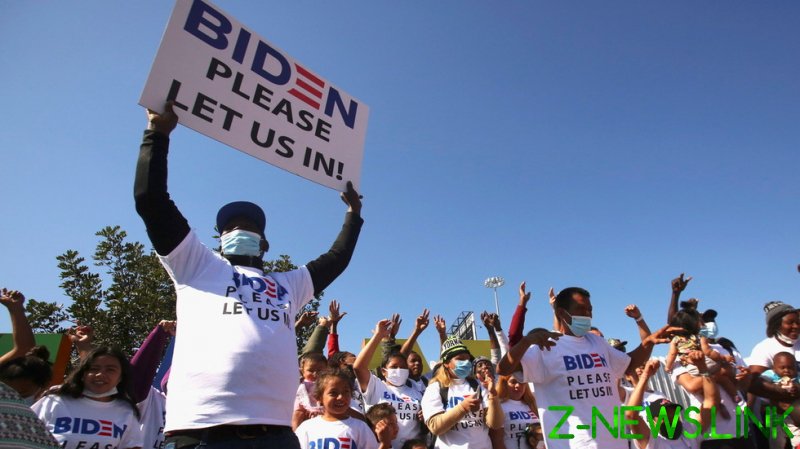 “They see him as the migrant president, and so many feel they’re going to reach the United States,” Mexican President Andres Manuel Lopez Obrador said after a virtual meeting with Biden on March 1, in which he reportedly urged his US counterpart to provide more aid to Central America to help stem the tide.

Mexico is happy that Biden has talked about a “pathway to citizenship” for millions of Mexicans living in the US – many illegally – as well as halted construction on the border wall begun by his predecessor Donald Trump and reversed Trump’s policies that kept tens of thousands of asylum-seekers in Mexico until their court hearings.

On the other hand, Mexican authorities are worried Biden is incentivizing the recent surge of migrants from places like Honduras, Guatemala and El Salvador, which is being exploited by drug cartels and other organized crime. This is according to a Reuters report published Wednesday, citing internal assessments, intelligence and testimonies.

Organized crime syndicates shifted gears from the day Biden took office and are showing an “unprecedented” level of sophistication in funneling migrants north, one anonymous Mexican official told the agency. Traffickers are using Facebook, WhatsApp, Instagram and YouTube to tell the migrants where they might encounter checkpoints, which freight trains to jump on, and how they can use loopholes in immigration laws.

For example, Central Americans are told to claim they are victims of extortion or face death threats from gangs, such as the notorious MS-13. They are also told to bring children along, so they will have an easier time claiming asylum, according to Mexican intelligence assessments.

After Democrats condemned detention of unaccompanied minors as keeping “children in cages,” the Trump administration sought to deter traffickers by demanding asylum-seekers stay in Mexico as they plead their case. This drastically decreased the number of children – and migrants in general – attempting to cross into the US.

Biden’s reversal of those policies in early February was followed by a surge of migrants north through Mexico, some wearing T-shirts with his campaign logo and a message, “please let us in.”

Biden administration officials, such as Homeland Security Secretary Alejandro Mayorkas, have publicly pleaded for migrants not to come in droves just yet. On Wednesday, former US ambassador to Mexico and current ‘border czar’ Roberta Jacobson urged Central American minors not to make the “dangerous” journey north, saying it’s “not safe.”

Jacobson also announced that the US will be restarting the Central American Minors (CAM) program, intended to bring in children of Salvadoreans, Guatemalans or Hondurans who are in the US legally, as an alternative to minors attempting illegal crossings.

While the conventional wisdom of immigration advocates in the US is that the migrants are fleeing poverty and oppression, Mexican intelligence estimates that the smugglers charge around $3,250 for each unaccompanied minor, and up to $20,000 for Africans or Asians who wish to come to the US through Mexico.

“Migrants have become a commodity,” one Mexican official said, adding that the cartels now see them as valuable as drugs. “But if a packet of drugs is lost in the sea, it’s gone. If migrants are lost, it’s human beings we’re talking about.”

One of the few Mexican officials willing to go on record, Chihuahua attorney general Cesar Peniche, told Reuters that criminals have been recruiting migrants as drug mules or kidnapping them for ransom. Chihuahua is the Mexican state that has the longest border with the US.

Peniche added that both Mexican and US policy need to be more clear, “so as not to spur illegal migration.”

While official Mexico City did not comment for the story, Reuters reported that the Mexican authorities were seriously considering “improving the infrastructure” on the 541-mile (871-km) border with Guatemala – in effect, putting up their own “wall” on the border with Central America, for all that they’ve denounced Trump’s wall on the US border with Mexico.