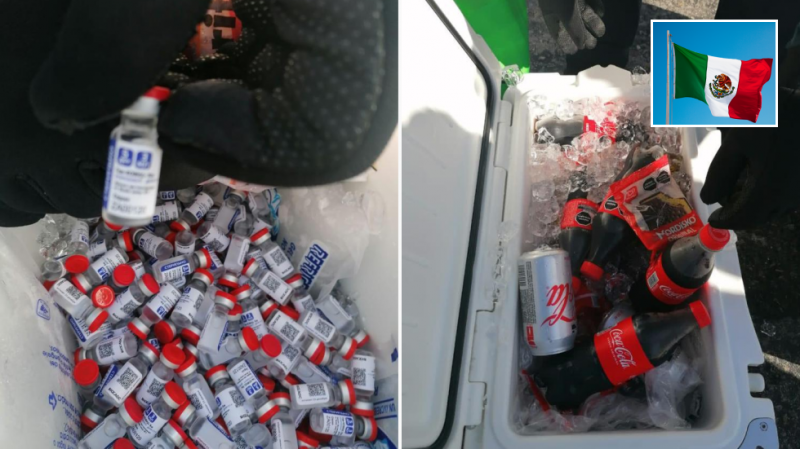 In a statement published on Wednesday, the Mexican government announced that customs officials, working together with the armed forces, seized two ice chests loaded with doses from a light aircraft landing at Campeche International Airport, in the southeast of the country. Official photos show them stowed alongside soft drinks and sweets.

Authorities say the chests were destined for a connecting flight to Honduras. The bottles were seized and kept cold while investigations were carried out to determine where they had come from.

However, in a statement issued on Thursday, the team behind the Russian-made formula announced that the batch was counterfeit, and simply “designed and packaged as Sputnik V.”

“Analysis of the photographs of the seized batch, including the design of containers and labels, suggests that it is a fake substance which has nothing to do with the original vaccine,” said the Russian Direct Investment Fund (RFID), which financed the development of the jab.

“This is an example of possible provocations against Sputnik V just as Russian officials warned last week,” it said. The “Mexican government stopped and prevented this provocation, possibly aimed at discrediting the Sputnik V vaccine through the shipment of fake vaccines,” the team added. An investigation backed by Russian and Mexican officials will now take place, and a number of Honduran citizens have been arrested.

Last Friday, a high-ranking Kremlin source told TASS news agency that an information war was beginning against Russia, waged by the West over vaccines.

“A scenario of information attack on Sputnik V is being prepared through controlled non-governmental organizations,” the official reportedly claimed, naming the US government, billionaire philanthropist George Soros, and news outlets including the UK state broadcaster, the BBC, as being behind it. That attack, the source added, aims to emphasize the vaccine’s supposed inefficiency and danger “by faking mass deaths allegedly caused by the use of the medicine,” he said.

Earlier this week it was reported that US officials lobbied the Brazilian government to reject Sputnik V as part of a campaign to counter Russia’s “malign influence” in South America. In its annual report, the Department of Health and Human Services (HHS) confirmed that it had “used diplomatic relations in the Americas region to mitigate efforts by states, including Cuba, Venezuela, and Russia, who are working to increase their influence in the region to the detriment of US safety and security.”

In February, a study published in the Lancet medical journal found that the formula, developed by Moscow’s Gamaleya Institute, was effective against Covid-19 in more than 90 percent of cases. Earlier this week, the Institute’s top researcher announced that no major side effects had been documented from the rollout of the vaccine.

“I am grateful to those who invested their hearts, souls, skills, and hard work to …