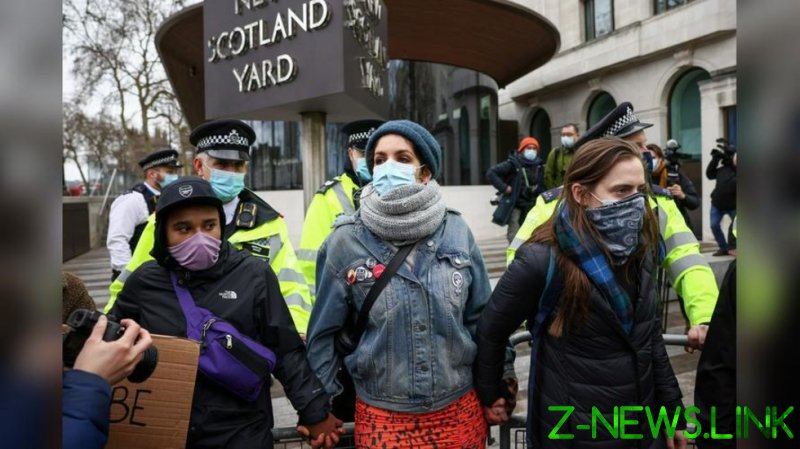 “We’re still in a pandemic,” Metropolitan Police commissioner Cressida Dick told reporters on Sunday. “Unlawful gatherings are unlawful gatherings. Officers have to take action if people are putting themselves massively at risk.”

She said she had not considered resigning, as the Everard case “makes [me] more determined, not less, to lead,” and added that she would have been in attendance herself if Saturday’s gathering at Clapham Common had been a lawful vigil.

The Everard vigil had been cancelled by order of the Metropolitan Police because of the Covid-19 pandemic, but hundreds of mourners still gathered to pay respects to the latest victim of escalating violence against women in London. The gathering turned ugly after a large group of police gathered on Clapham Common, leading to booing and yelling by the crowd. Police then arrested several women, including at least four who were standing on the edge of the bandstand and were grabbed from behind by officers.

Disturbing scenes of mourners clashing with police and a woman being handcuffed and held face down on the ground by multiple officers prompted calls by Home Secretary Priti Patel and London Mayor Sadiq Khan for an investigation into the vigil crackdown.

The scene was far more peaceful on Sunday afternoon, as demonstrators gathered outside Scotland Yard to call out police misconduct and demand that London’s streets be made safer for women. Many of the officers lined up behind a barricade at the building’s entrance were women – in contrast to the mostly male force on Saturday night.

Some of the protesters held “ACAB” signs, while the crowd chanted, “Defund the police.” Other signs included “Shame on Priti Patel,”“Walking home should not be a death sentence,” and “End state violence.” Protesters also chanted, “Say it loud, say it clear, brutality’s not welcome here,” and “Sisters united will never be defeated.”

At one point, the crowd chanted “shame on you” at police. At another, protesters silently held their fists in the air.

Protesters later marched to Parliament Square, at which point the crowd reportedly numbered in the thousands. The demonstrators then staged a “die-in,” laying on the ground silently in remembrance of those who have been killed. The crowd later chanted, “Kill the bill,” referring to legislation that would give police more power to stop protests.

Everard was kidnapped on March 3 and murdered, allegedly by a London police constable. Her death became a rallying cry over the rising dangers to women on UK streets. Green Party politician Baroness Jenny Jones suggested imposing a 6pm curfew on all men.