Home / sports / Messi signed a contract with Barcelona until 2021

Messi signed a contract with Barcelona until 2021 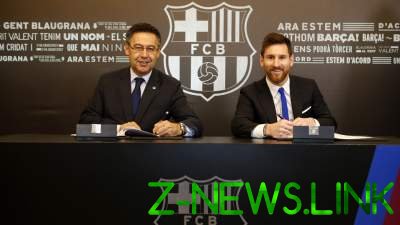 The Catalan club’s official website confirmed the conclusion of the contract with Messi before the end of the season 2020-2021. The previous agreement
Messi with Barcelona expired in the summer of 2018, which has led to the emergence of numerous rumors about the transition Messi to Manchester city or another European giant.

Financial details of the transaction are not specified. According to unofficial information, Messi is the highest paid footballer in the world, earning the many bonuses of 62 million euros per year.

Messi first steps in professional football did in “Newells old boys”, but in 2000 moved to Spain and signed in Barcelona. The debut of Argentine in the team took place in October 2004 in a match against “Espanola”.

See also:  "Shakhtar" lost "Celta" and flew out of the Europa League

Since then Messi in all competitions played 602 games, scoring a record in the history of the club, 523 234 goals and giving assists.

In the era of Lionel Messi Barcelona won 30 trophies, including 8 wins in the Spanish League and 4 triumph in the Champions League.