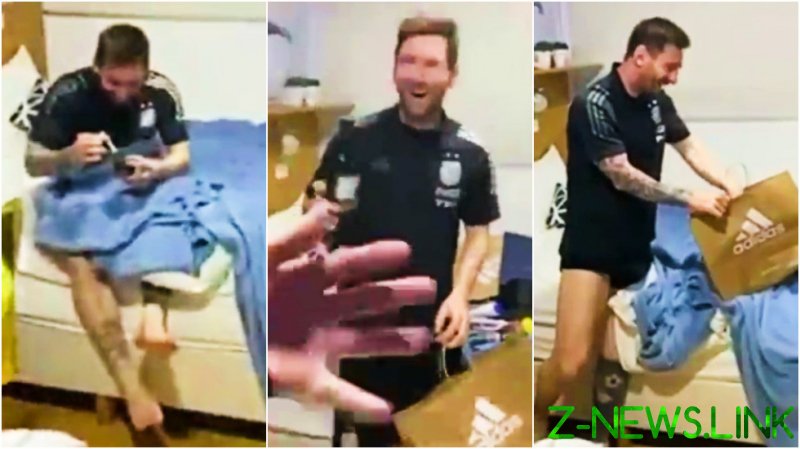 The iconic number 10 is currently on international duty in Brazil, where La Albiceleste top Group A after a 1-0 win over Paraguay in their last match, when Messi won the Man of the Match award.

Preparing for their encounter with Bolivia on Monday, Messi’s teammates are said to have disturbed the birthday boy in the middle of the night.

Singing ‘Happy Birthday’ to him in Spanish, players such as Angel Di Maria, Nicolas Otamendi and Leandro Paredes lavished him with gifts including an oversized bottle of water, a bottle of wine and a baseball cap.

A free agent in six days’ time, Messi is focusing on trying to win his first major silverware with Argentina after the heartbreak of three lost finals from 2014 to 2016 at the World Cup and Copa America.

Yet media outlets in Catalonia report that his new two-year deal, which includes an optional additional season, could be confirmed as early as tomorrow, or on Barca president Joan Laporta’s own birthday on June 29.

Putting fear into Blaugrana fans, however, La Liga head Javier Tebas has suggested that the club may have to offload several players to balance the books.

“Barcelona have exceeded their wage cap,” he said on Monday. “I hope they can keep Messi, but to do so they will have to make cuts elsewhere.

“The severity of the situation depends on the resources they are capable of generating,” Tebas went on. “Barca have to restructure their debt. If they manage that, the situation won’t be serious.

“But they have taken their wage bill to the limit. And when football has coughed – or, better put, punctured a lung – they haven’t wanted to absorb that loss of income. They must take measures.

“There are other big clubs that have made a bigger effort to avoid it. Real Madrid have made a commendable effort to ensure their losses aren’t the same as Barca, who take the trophy for losses.”