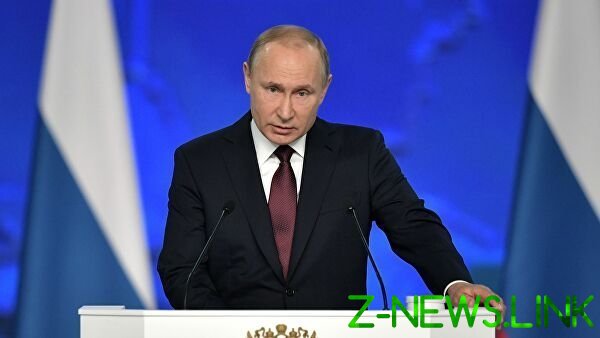 Putin addressed the Federal Assembly. The people want change, the President said. And proposed to amend the Constitution. No international courts, no international law no longer interfere with the construction of the isolated authoritarian (i.e. sovereign in the view of Putin) state. To the state Duma (in the form in which it is) claimed the government, which the President at any time can dismiss. The court looked independent from everyone and everything except the President. Well, under the change, obviously, refers to the movement of Medvedev’s government in the security Council.

Putin’s address annual. However, the President not only tried to analyze what has happened in Russia over the past year, but didn’t even mention a landmark event for the country. And last 2019 such events were many: raising the retirement age; the arrest right in the courtroom of the Council of Federation Senator accused of creation of criminal community and the organization of the killings; the arrest of one of the largest in the Russian market investors American Michael Calvey (Baring Vostok) — as evidence of the growing pressure of security forces on business; disaster “Superjet” in Sheremetyevo and the death of 41 persons; the case of journalist Ivan Golunova — as the most sensational of the thousands of cases where police planted the drugs inconvenient to the citizens; the helplessness of the authorities in the fight against forest fires and floods in Siberia; the death of fourteen submariners during the fire on the submarine nuclear submarine as-12 “Losharik”; explosion during testing of a rocket with a nuclear power plant under the Severodvinsk and the death of five testers; the use of FSB data on Amnesty of capital against the business; the murder of a soldier colleague in Transbaikalia; the adoption of a law according to which a foreign agent may be considered any citizen of Russia; a ban on the participation of the Russian sportsmen under the flag of Russia in international competitions, including the Olympics, because of government manipulation of the dope… And the war in the Donbass, the ongoing military campaign in Syria and the new military adventure in Libya.

The President did not say all this not a word, did not explain, was not called responsible, not say that it is supposed to do to avoid this in the future. On the contrary, accepting the sudden resignation of the Cabinet of Ministers, Putin praised the government for work. But this is not just mishaps that happen. Such events occurred in the country within one year, suggests that Russian political and economic system is becoming more and more dangerous for citizens of the country, lost effectiveness and is critically lagging behind the world level.

The proposed changes to the Constitution have nothing to do with the main Russian problem and does not improve life in the country. Introduction to the Basic law of the state Council and the redistribution of powers between the President and Parliament aimed at solving completely different tasks — provision of a formal transit authority with no real changes. This “checks and balances” that will not lead to the real separation of powers, and create opportunities for terminal manipulation. The mechanism for the removal of judges of the Supreme and constitutional courts, and the introduction of special provisions that international law, relevant treaties and obligations to us not the decree, and fix existing features of the authoritarian system Putin samoizoliruyuschih — what led to the crisis and the extreme inefficiency of the current system.

A kind of “voting citizens” for Putin proposed in the letter amendment is another manipulation that will give the opportunity categorically to refer to “the will of the people” without the present constitutional referendum. Moreover, as explained by the press Secretary of the President, “we can not talk about the referendum and does not actually imply any adoption by vote”. So basically this is another plebiscite for Putin, for his personal legitimacy.

In the message to the Federal Assembly “problem” was called the “low income of a considerable part of citizens”, but was not offered the system of measures of the solution. Distribution of money in the form of increased maternal capital and the issuance of its body at the birth of the first child and the extension of the term of benefits for low-income families is only a populist attempt to mitigate the negative effect of “pension reform” but not compensation for losses suffered by the people. The more that demographic problems are caused not only by objective long-term factors and the decline in real income over the past five years. Likely a key factor in the fertility decline was the loss of a sense of future, lack of understanding of prospects, insecurity, a sense of insecurity in their own country, lack of freedom and justice. And that these problems are systemic in nature, no doubt.

To understand this, it helps to see how you perform tasks previously identified, what has been done and not done by the government over the past decade, Putin copes with the purposes which before itself puts.

More than 11 years ago, in November 2008, Putin approved the “Concept of long-term socio-economic development of Russia until 2020”, known as “Strategy-2020”. On the development of a program for several years worked for 21 working Group1. The groups included more than a thousand experts, another 400 experts participated in the work in the regions. Program dozens of experts received orders, medals and higher благодарности2. In March 2012, the authors submitted the final report on more than 800 pages involving the transition of Russia to 2020 in the post-industrial model of development and GDP growth of at least 5% per year.

By 2020, all was completely failed. Once again it was confirmed that Putin and his government is unable not only to see and build the future of Russia, but even to calculate the relative short term. Discrepancies between promises and reality is striking. Over 11 years:

A significant outcome of the decade of steel erupted last summer in Moscow a massive and completely legitimate peaceful street protests. Twenty-five years the Russian authorities are engaged in election fraud at all levels. Rigging was the real Kremlin’s “strategy-1996”, “strategy 2000”, the “strategy-2012”, “strategy 2018”. In 2019, those who protested the manipulation of the elections, decided to intimidate. Courts top team sent 18 people who have not committed any crimes in prison — one year, one on two, and one and four years (see “Right of protest”, September 2019).

To serious failures of the last ten years and the policy of Russia in the field of strategic security. There was almost complete collapse of the global system of nuclear arms control. In 2019 was denounced the Treaty on intermediate range (the INF Treaty). Nothing is being done to conclude a new Treaty on strategic offensive arms (the duration of the start-3 expires in 2021). The responsibility for this lies with both Russia and the United States. But for the Russian economy of the ensuing arms race is suicidal. The arms race 30 years ago, has already destroyed our country. However, instead of building a policy on the prevention of war, the Kremlin is preparing for war and did not substantially take to the strategic security of the country (see “Danger of war”, December 2019).

The war in the Donbass, the Crimea annexation, endless confrontation with Ukraine, turning the country into a target for sanctions, the loss of international reputation, corruption at all levels of government, total lies, incitement to hatred — all these are direct results of the Kremlin’s policy in recent years. All of this will continue in the coming year.

By the third decade of the XXI century in Russia was established backward and inefficient authoritarian system of government. In this system does not respect people, it is no vision of the future is not here, and moral and value orientations. Such a system is unable to meet the challenges of the modern world, to ensure the preservation and development of the country in the coming age (see “Maturity of authoritarianism”, September 2019). This is not to hide any celebration of the 75th anniversary of the great Victory, nor psevdouspehi in a hybrid war or intimidation of persons nor promises in his annual messages, no game in demonstrative resignation of the government.

In his message, January 15, 2020, Putin, in fact, not only proposed to retain the system, but also to make it more authoritarian, more closed and completely ineffective. This is the main meaning of the message to the Federal Assembly and the results of the last two decades, Putin.