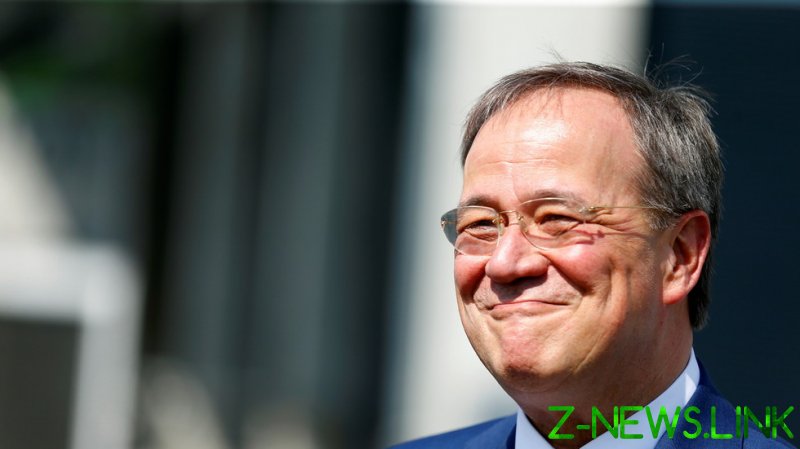 The incident occurred as Germany’s President Frank-Walter Steinmeier visited Erftstadt – a small town in western Germany some 20 kilometers south of Cologne. The town was ravaged by raging streams of water as heavy rainfalls caused record flooding in the area.

A huge sinkhole opened near the town’s district of Blessem, swallowing up cars, castle ruins and even some half-timbered buildings. Steinmeier arrived in Erftstadt to express his sympathies and promise assistance to the disaster victims.

Laschet, who is also state premier of North Rhine-Westphalia, where Erfstadt is located, was apparently not in a somber mood, however. The frontrunner in the race to be Germany’s next chancellor was caught on video laughing and cracking jokes with fellow politicians in the background at the very moment Steinmeir was addressing the nation.

Video of the faux-pas quickly spread on social media and sparked a wave of indignation among both politicians and ordinary citizens. “I am really speechless,” said Lars Klingbeil, the General Secretary of Germany’s Social Democratic Party (SPD).

Deputy Chair of SPD, Kevin Kühnert, described the situation as a “question of character.”

Laschet, who took over the reins in Chancellor Angela Merkel’s Christian Democratic Union (CDU) in January, is the party’s candidate for chancellorship in the upcoming general elections in September.

Responding to the mounting backlash over his PR blunder, Laschet issued an apology.

“The regional government takes the fate of those affected to heart,” he wrote in a Twitter post, adding that he regrets the impression that was created during the president’s speech. “This was inappropriate and I am sorry,” he said.

Many critics apparently felt his apology was “half-hearted.” “Wouldn’t you just tell us the joke that was so funny it made you laugh in the face of all this suffering?” a German columnist and author, Sarah Bosetti, said in response to Laschet’s tweet.

Germany is still reeling from what was described as the “catastrophic” floods earlier this week. At least 143 people already died in the calamity, including 98 people in the tiny rural district of Ahrweiler south of Cologne, one of the hardest-hit areas in the country. Earlier, local authorities reported that over 1,000 people were missing in the district.

Germany was not the only nation hit by the disaster. A further 27 people were killed in neighboring Belgium, where Prime Minister Alexander De Croo declared that July 20 would be a national day of mourning. Local media also reported that the Belgian National Day celebrations next Wednesday would also be downsized as a result.