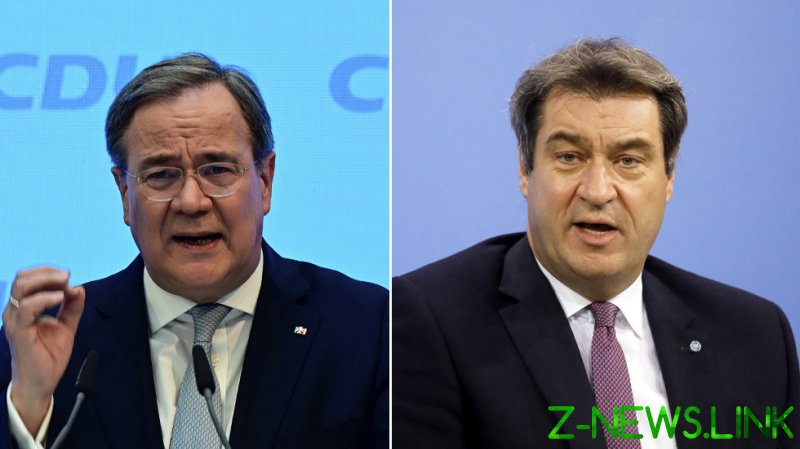 The CDU committee convened in Berlin on Monday to discuss who should run from the party in the September general election. Its chairman, Armin Laschet, received overwhelming support from the party top brass, local media reported.

The nod of approval pours cold water on the ambition of Markus Soeder, who leads the Bavaria-based Christian Social Union (CSU), a sister party of the CDU. On Sunday, Soeder said he wants to run for the top job too.

The two conservative parties are long-time political allies and are expected to field a single candidate, as usual. Soeder’s bid was conditional on the backing from the CDU. His party is holding its own top brass meeting later on Monday, after which Soeder is scheduled to hold a press conference in Munich.

Both Laschet and Soeder on Sunday stressed the unity of the CDU/CSU alliance, saying they had no fundamental differences. “I can say this from the beginning: no matter what the decision will be in the end, we will both personally work together very well,” the Bavarian politician assured.

The parties occasionally had their bitter differences in the past, like in 1975, when the Christian Democrats nominated Helmut Kohl for chancellor without the Christian Socialists’ consent. They responded by announcing Franz-Josef Strauss as their candidate, but the crisis was ultimately resolved before the general election.

The two potential candidates’ standing with the voter base may affect the ultimate decision. Recent opinion polls showed Laschet’s popularity sliding along with his party’s, while Soeder enjoys relatively strong public support.

Laschet, a Merkel loyalist, was elected to lead the CDU in January, when he took over from the previous would-be successor to the enduring German leader, Annegret Kramp-Karrenbauer.

Her two-year term at the helm of the party was marred by poor performance during a European Parliament election and ended after a major scandal in February 2020. She resigned after the CDU allied with the right-wing Alternative for Germany to elect the head of the federal state of Thuringia.