Home / WORLD / ‘Merkel’s legacy is defined by inflation, climate fanaticism & migration’ – German MEP on what may change after elections

‘Merkel’s legacy is defined by inflation, climate fanaticism & migration’ – German MEP on what may change after elections 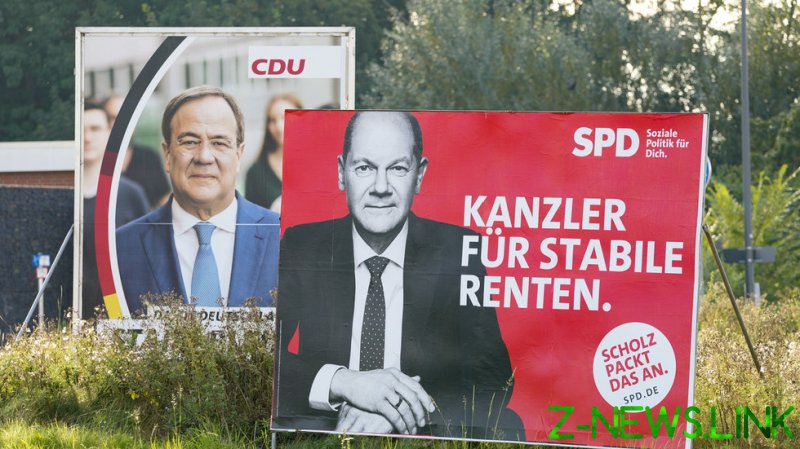 Regardless of the result of next week’s election, it will represent a changing of the guard in German politics, as Angela Merkel, Germany’s chancellor of sixteen years, is stepping down from the role.

Gunnar Beck, who was educated at Oxford and therefore speaks impeccable English, predicts that the most likely outcome will be a Scholz chancellorship. He envisages that Scholz will lead a Left-wing rainbow coalition of the SPD, the Greens and Der Linke – the far-Left descendants of the old East German Communist Party.

Beck tells me that “even six weeks ago, this would have been unthinkable.” But a series of gaffes by Laschet has turned the polls on their head since mid-August. Beck points specifically to the moment that Laschet was caught laughing when visiting flood-hit areas in southern Germany. From that point, the CDU’s support has collapsed, and the SPD have been the principal beneficiaries.

In contrast to Laschet, Beck notes that Scholz, who he describes as “a boring man,” has made “no PR mistakes.” Indeed, Beck thinks it somewhat ironic that Scholz is more of the continuity candidate than Laschet and describes him as “a mini Merkel.”

Beck predicts that, under a Scholz-led government, Germany will remain “very pro-migration and fanatical about climate change, as Scholz naturally favours the most socially degenerative trends within German society.” Moreover, Beck claims, “Scholz will be edged-on even further in the direction of (sub-)cultural change by his even more radical coalition partners.” He also believes that government spending will continue to rise.

Beck does not see the election having any real impact on Germany’s relationship with the European Union, as both Laschet and Scholz are as fanatical about the EU as Merkel.

Beck’s own party, Alternative fur Deutschland (AfD), are polling around 11% at the moment. He believes that his party may make small gains, but not a significant breakthrough this time around.

He partially blames the German media for this. He tells me that AfD are “the only opposition” to the mainstream and that the German media is universally hostile to his party. He argues that they have buried topics that they don’t want people to discuss, such as migration and, as a result, the issue has not really featured during the election campaign.

Beck finds this difficult to fathom, as, he states, “there are 2.5 to 3 million largely unqualified and often illiterate migrants who have entered Germany at Merkel’s invitation, and they are costing the German taxpayer at least 40 billion euros every year.”

On the other hand, Beck argues, the German media has been nurturing public hysteria about climate change, as they continue to ignore the fact that the EU’s plans to drastically reduce CO2 emissions will cost German consumers and taxpayers trillions of euros until 2050.

One issue that has featured heavily has been the government’s response to the Covid-19 pandemic, and Beck believes Scholz has benefitted because, as the current Finance Minister, “he paid people wages when they were forced to remain at home during lockdowns.”

Beck envisages that issues surrounding vaccination mandates will resurface after the election because in Germany “there is a larger percentage of people who don’t like to get vaccinated.” He also stated that it “brought more people on to the streets more than any other issue.”

Beck believes, however, that most people will be forced to be vaccinated through economic pressure. He points to the fact that Germans may, in future, be charged up to 100 euros to be Covid tested, which is financially prohibitive for most people. Thus, the only other option will be for people to get vaccinated.

So, what does Beck think of Merkel’s legacy? He thinks that it is defined by “inflation, climate fanaticism and migration.” He also sees her time as chancellor as a wasted opportunity for Germany. Beck points to the fact that Merkel has been “lucky” because she has overseen a period of relative economic prosperity but has failed to make the most of the situation.

One of the reasons Beck believes the Merkel years have been a time of missed opportunity is the exorbitant cost of Germany’s EU membership. The figures Beck produces are truly eye-watering. He estimates that Germany subsidises Brussels and the European Central Bank in Frankfurt with “between 100 and 140 billion euros” every year.

Moreover, when Germany’s Target2 credits to other eurozone countries are taken into account, coupled with the costs of the euro to German savers and taxpayers, Beck believes EU membership amounts to around a massive 350 billion euros every year, or 10% of Germany’s GDP.

From what Becks says, there can be no doubt that Germany is the banker of Europe, and this financial burden is only to increase now that the UK has left the club. Beck notes that Germany’s contribution to the EU budget, which as a result of Brexit has risen to 44 billion euros a year, is the mere tip of the iceberg. Indeed, he states that “what most commentators ignore is that the euro is easily the most expensive currency ever adopted by a country.”

Another aspect of Merkel’s legacy has been demographic change in Germany. Indeed, in 2015, Merkel flung open Germany’s borders to around 1.1 million migrants. Beck argues that although the issue of migration has been buried during this election, it will soon return with the inevitable Afghan refugee crisis that is heading Europe’s way.

Indeed, under the new EU Migration Pact, which Scholz supports, EU Commission President Ursula von der Leyen is proposing to bring dozens of millions of migrants, mainly from Africa, into Europe by 2035. If these plans are realised, it will, Beck argues, “bankrupt Germany’s welfare state within a matter of years.”

Regardless of who wins next week’s election, Beck is convinced that Germany’s response to the Afghan refugee crisis will be “to take in many more migrants and then push for redistribution, which is a problem for the EU.” He notes that Poland and Hungary may well hold out against these measures but predicts that eventually they will be “bribed to comply” by Brussels.

From my conversation with Beck, I get the feeling that he is resigned to the fact that it will be business as usual in Germany, regardless of who wins next week’s election. However, with the coming migrant crisis, and with Germany’s financial contributions to the EU likely to rise, politics could be planted firmly on his party’s lawn in the not-too-distant future.