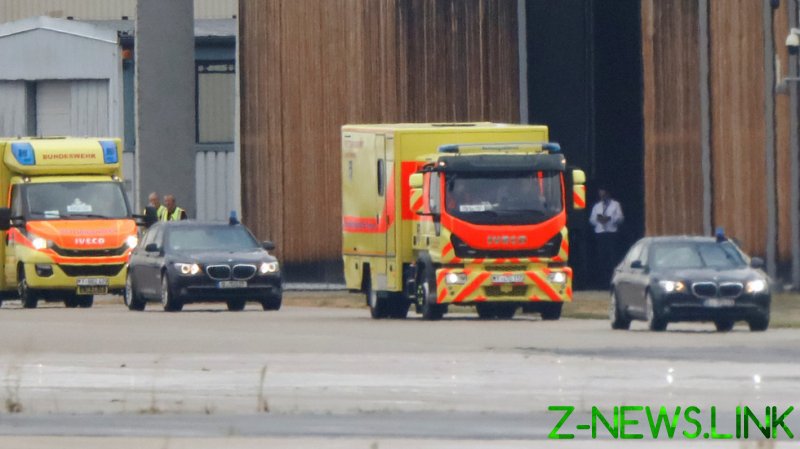 The activist, who remained in a medically induced coma during the journey, was transported to Berlin’s renowned Charite hospital inside a Bundeswehr intensive care ambulance truck. The vehicle had military markings and a special license plate showing a code starting with the letter Y, which is used exclusively by the German military.

Navalny was airlifted from the Siberian city of Omsk on Saturday morning. Online flight-tracking service FlightRadar showed that the private jet, chartered by Berlin-based NGO Cinema for Peace, was about to land in Berlin’s Schonefeld Airport. However, the plane actually landed in the capital’s Tegel Airport, on a strip reserved for military aircraft. According to Bild, that was a “deliberate” misinformation tactic by authorities.

A German government spokesperson stated that Navalny’s evacuation was a private initiative. At the same time, ZDF reported that Navalny was assigned “guest of the chancellor” status in official German documents. The Interior Ministry confirmed to the TV channel that this was done to “ensure the best possible police protection.”

German media previously reported that Chancellor Angela Merkel’s office and the Foreign Ministry were “working behind the scenes” to help arrange Navalny’s flight. The activist’s longtime close associate Leonid Volkov thanked Merkel and the German government for “international support and help in solving a huge number of bureaucracy issues and security.”

Navalny suddenly felt unwell and lost consciousness shortly after boarding a plane during his trip to Siberia on Thursday. The aircraft made an emergency landing in Omsk, where Navalny was hospitalized. His team and family alleged that he had been poisoned by authorities, but the doctors treating him in Russia found no traces of toxic substances in his system.

Navalny’s associates pushed for his urgent transportation to Germany, arguing that he could not be adequately treated in Omsk. Local doctors initially insisted that the activist’s condition was not stable enough for transportation, but they later allowed for him to be moved to Berlin.