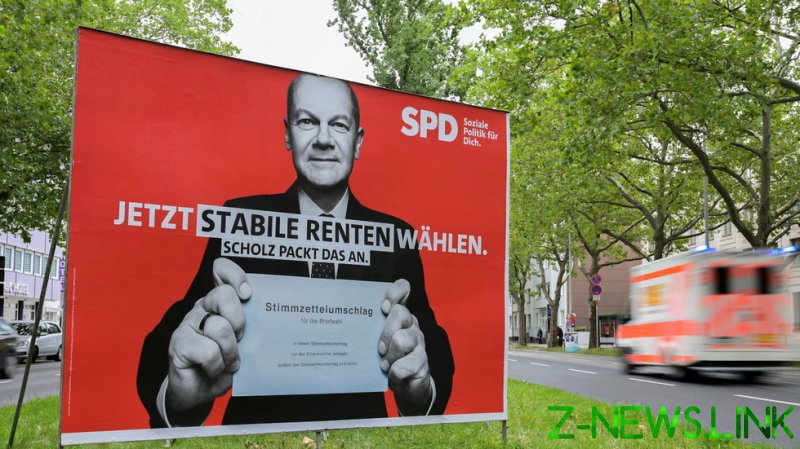 The Social Democrats have emerged as the strongest political force in Germany, according to one of the leading market research and opinion polling companies in Germany – the Forsa Institute. The center-left party enjoys the support of 23% of Germans, the Forsa poll, published on Tuesday, says.

That puts the Social Democrats one percentage point ahead of their long-time coalition partners, Merkel’s Christian Democratic Union and their Bavarian allies from the Christian Social Union. Together, the liberal-conservative bloc known as ‘the Union’ is backed by 22% of the German citizens, the poll conducted for the German RTL and n-tv broadcasters shows.

That is some 10 points less than its previous federal election result back in 2017. At that time, the 32.9% received by the union was not considered a particularly strong result either.

For Angela Merkel’s party, which it is about to see its long-time leader step down, this marks the worst result recorded by the polling company since its foundation back in 1984. It might well be one of the worst results for the Union in its history since its election results had never been below 25% ever since the party first went to the polls back in 1949.

In April 2021, however, another poll by the Forsa institute showed that public support for the Union fell to 21% – just after the bloc chose Armin Laschet as Merkel’s successor at the helm of the party and – potentially – at the helm of government.

The ill-fated head of the German state of North Rhine-Westphalia has hardly improved his image since April. In mid-July, he had to apologize after he was filmed laughing and cracking jokes as Germany’s President Frank-Walter Steinmeier expressed his solidarity with the victims of devastating and deadly flooding that hit the state Laschet himself was heading.

Some two weeks later, he had to apologize again after his book was flagged for plagiarism.

The Union managed to reclaim some popularity since April by that time and was polling at 30% by the end of July. Its public support, however, has been in decline ever since. According to Forsa, most Germans, including more than a half of supporters of the Union themselves, believe this trend could hardly be reversed before the elections.

The Social Democratic Party (SPD), on the contrary, shows some signs of revival. It received just 20.5% of the vote in the previous parliamentary elections in September 2017 – something the party called one of its worst results in history. It then went through a sort of a crisis as its public support plummeted even further. The party polled at just 13% back in April, behind the ‘Union’ and the Greens.

The Germans will head to the polls on September 26. The Forsa Institute conducted its survey among some 2,500 voters between August 17 and 23.