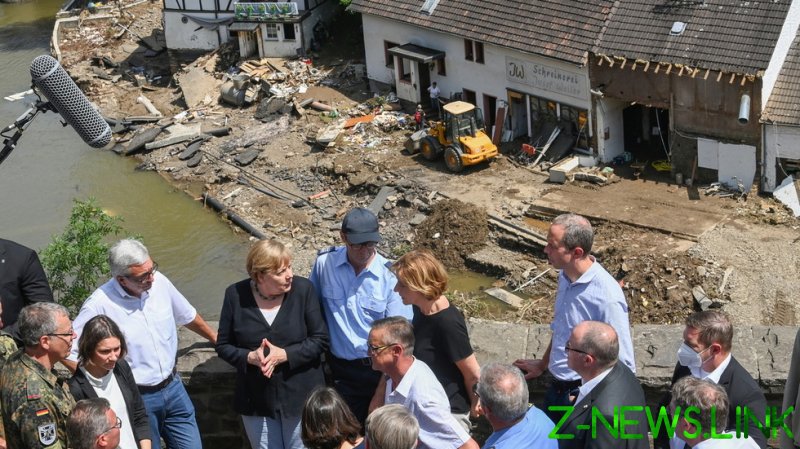 The chancellor arrived in the western state of Rhineland-Palatinate on Sunday to get the real picture of what she called surreal “ghostly images” of the territories devastated by the record floods from heavy rains earlier this week.

Merkel promised speedy assistance to all the affected areas and said that the natural disaster has clearly shown that more climate protection is needed. “We stand by your side, at the federal level and that of the state,” the chancellor said, adding that everyone can now see “with what force nature can act.”

The German authorities would “make a stand” against the destructive forces of nature – now and in the future – Merkel said, adding that a new policy is required: one that “takes nature and climate into consideration far more so than we have done over recent years.”

The chancellor also said that the federal government and the state authorities would team up to “bring the world in order step by step in this beautiful place.” On Wednesday, her cabinet is expected to adopt a quick aid program. Finance Minister Olaf Scholz already announced that Berlin would spend €300 million ($354 million) on it.

The Prime Minister of Rhineland-Palatinate Malu Dreyer said, however, that a “long-term effort” is needed for the affected areas to recover. “It will be a long time before people can say: I recognize my home country again,” she said, adding that, so far, rescue efforts are top priority.

“We will not rest until the people who are missing are found,” she said. At least 157 people died in Germany because of the flooding, according to the German media. In the small rural area of Ahrweiler, Rhineland-Palatinate, the death toll reached 110 while 670 people were injured.

In the neighboring state of North Rhine-Westphalia, the number of confirmed deaths reached 46. At least one person died in the floods in Bavaria, which is the latest German region to be hit by the disaster.

Some 600 kilometers of railway tracks were damaged in Germany, according to Deutsche Bahn – the German railway operator. Transport Minister Andreas Scheuer said that the true extent of the damage can be assessed only after all the clearance works are finished. Yet, even now, the devastation appears to be immense.“Since 20 of the 35 bridges on the Ahr [River] have been destroyed, you can already guess the huge task that lies ahead of us,” Scheuer told the local media.

Some 800 soldiers and around 110 military vehicles were deployed to the affected areas to deal with the consequences of the flooding. Germany’s Defense Minister Annegret Kramp-Karrenbauer also traveled to the flooded areas on Sunday to meet with the military engaged in the relief operation.

Even the most experienced soldiers, who had already been deployed on similar missions abroad, said they have never seen anything like this before, the defense minister told the media. “Everyone is deeply affected,” said Kramp-Karrenbauer.

Germany is not the only European nation hit by the disaster, though. In Belgium, 31 people died in the floods and 163 are missing. Some 11,000 families were left without power in the Liege area. In Wallonia, some 20 villages were left without drinking water and rail infrastructure was damaged.

In Switzerland, Lake Zurich broke its banks, and there are fears that lakes Lucerne, Biel and Thun will follow suit. In Austria, towns near Salzburg were affected by the flooding.