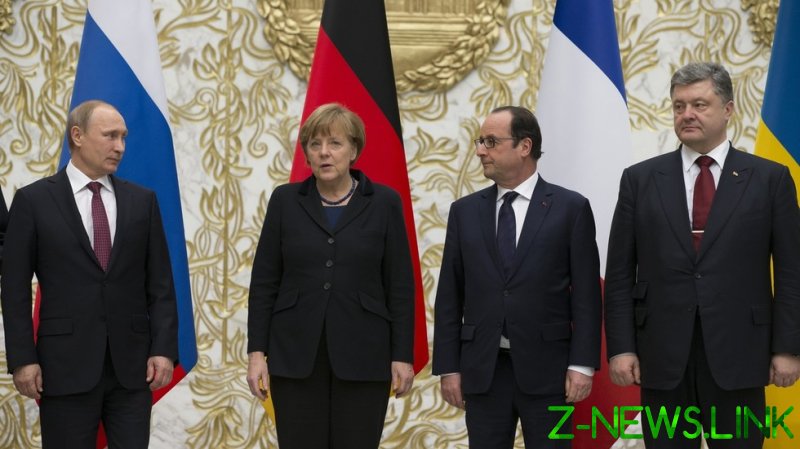 The 2014 ceasefire brokered by Berlin and Paris in Minsk was an attempt to give Kiev time to strengthen its military and was successful in that regard, former German chancellor Angela Merkel argued in an interview published on Wednesday.

In an extensive interview about her 16 years in power, Merkel told Zeit magazine her policy towards Russia and Ukraine was correct, even if not successful.

“I thought the initiation of NATO accession for Ukraine and Georgia discussed in 2008 to be wrong,” Merkel said. “The countries neither had the necessary prerequisites for this, nor had the consequences of such a decision been fully considered, both with regard to Russia’s actions against Georgia and Ukraine and to NATO and its rules of assistance.”

She described the September 2014 Minsk agreement as “an attempt to give Ukraine time.” France and Germany had brokered a ceasefire after the failure of Ukraine’s attempt to subdue the republics of Donetsk and Lugansk by force.

“[Ukraine] used this time to get stronger, as you can see today,” Merkel continued. “The Ukraine of 2014/15 is not the Ukraine of today. As you saw in the battle for Debaltsevo in early 2015, [Russian President Vladimir] Putin could easily have overrun them at the time. And I very much doubt that the NATO countries could have done as much then as they do now to help Ukraine.”

READ MORE: Merkel explains her role in the Ukraine conflict

The defeat at Debaltsevo resulted in the second Minsk protocol being signed in February 2015. Merkel said that it was “clear to all of us that the conflict was frozen, that the problem had not been solved, but that gave Ukraine valuable time.”

Meanwhile, she defended the decision to build the Nord Stream 2 pipeline for Russian gas, since refusing to do so would have “have dangerously worsened the climate” with Moscow given the situation in Ukraine. It just so happened that Germany couldn’t get gas elsewhere, she added.

Asked for any self-criticism, Merkel told Zeit that “the Cold War never really ended because Russia was basically not at peace,” and that NATO “should have reacted more quickly to Russia’s aggressiveness” in 2014.

Pyotr Poroshenko, who became president of Ukraine after the 2014 US-backed coup in Kiev, told a domestic audience in August 2015 that Minsk was a ruse to buy time for a military build-up. He admitted as much to the West in July 2022, in an interview with German media.

Russia sent troops into Ukraine on February 24, citing Kiev’s failure to implement the Minsk agreements, designed to give the regions of Donetsk and Lugansk special status within the Ukrainian state. The Kremlin recognized the Donbass republics as independent states, which have since voted to join Russia alongside with most of the regions of Kherson and Zaporozhye, and demanded that Ukraine officially declare itself a neutral country that will never join any Western military bloc. Kiev insists the Russian offensive was completely unprovoked.