Mending the fence? Capitol security barrier may make a comeback as police fear violence at ‘Justice for J6’ rally in DC – media 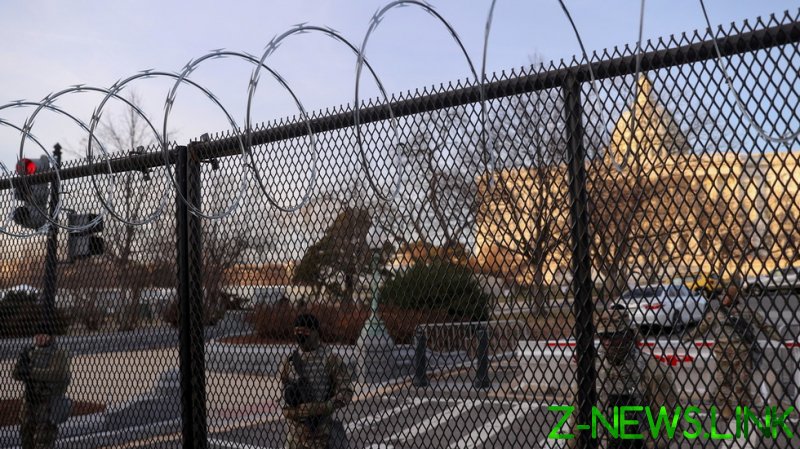 Though the seven-foot-tall steel barrier was only removed from the Capitol in mid-July – first erected in the wake of unrest on January 6 – it is likely to make a comeback ahead of the ‘Justice for J6’ demonstration set for September 18, according to sources cited by the Associated Press, Politico and CNN.

Though security plans for the rally have yet to be finalized, Capitol Police Chief Thomas Manger has recommended new fencing in discussions with officials, Politico reported, noting that the request is likely to be granted.

House Speaker Nancy Pelosi (D-California) declined to discuss “specifics” about the security arrangements in comments to reporters on Wednesday, but said “We intend to have the integrity of the Capitol be intact.”

The tentative plan, however, reportedly calls for fencing along streets directly adjacent to the Capitol building and Supreme Court, but would not place barriers around congressional office buildings that dot the area.

The heightened state of alert comes as next week’s ‘Justice for J6’ event fast approaches. The protest is meant to support the some 600 people charged for alleged participation in the Capitol riot – deemed “political prisoners” by rally organizer Matt Braynard.

While anonymously sourced reports relying on “intelligence gathered by federal officials” have warned that “far right extremist groups like the Proud Boys and Oath Keepers” would attend the rally and potentially provoke violence, Braynard has insisted the event would remain peaceful and that he’d coordinated with local police for more than a month.

“There is no possibility of violence from our peaceful protest,” Braynard told Newsweek, adding that he previously organized “two similar rallies in DC – at the Department of Justice and at the prison where these political prisoners are being held. These events occurred without incident.”

Braynard, a one-time campaign operative for ex-President Donald Trump, also urged attendees from promoting any particular candidate or political movement at the rally, suggesting it could distract from the overall message about those charged for the DC riot.

Moreover, the Proud Boys – one of the allegedly “far right” groups officials expect to attend the rally – has strongly urged members not to show up.

“If you rally in DC right now, you’re an idiot and you’re going to get people thrown in jail or worse,” the group’s primary Telegram account wrote in a post earlier this week, later adding “We will not be attending this guaranteed disaster” while linking to a news story about the September 18 demo.

Several Proud Boys were alleged to have taken part in the January 6 unrest, though the FBI could find scant evidence of significant coordination among members, nor among any other organization. Instead, investigators believe most rioters had no “serious plans” for what to do once they breached the Capitol building – contradicting claims of an organized “insurrection” plot repeatedly pushed by Democratic lawmakers since January.

The US national security state has issued a near-constant stream of warnings about allegedly “increasing” threats from “domestic extremists,” “conspiracy theorists,” Trump supporters and even opponents of Covid-19 lockdowns. But despite regular security bulletins from the FBI and the Department of Homeland Security (DHS), the warned-of attacks have not materialized.

While a security review commissioned by the House speaker and published in March recommended permanent mobile fencing to replace the temporary barrier then ringing the Capitol, no such system has been installed, and would require a lengthy approval process in any case. Some Democratic lawmakers even called to make the temporary fence permanent in the days after January 6 – though the dystopian optics of a seven-foot cage topped with razor-wire encasing the halls of Congress may have made the idea a non-starter.

A number of Republicans have spoken out against beefed up security measures at the Capitol, including Senate Minority Leader Mitch McConnell, who in March said the temporary fencing was unnecessary, “looks terrible” and reminded him of his “last visit to Kabul.”