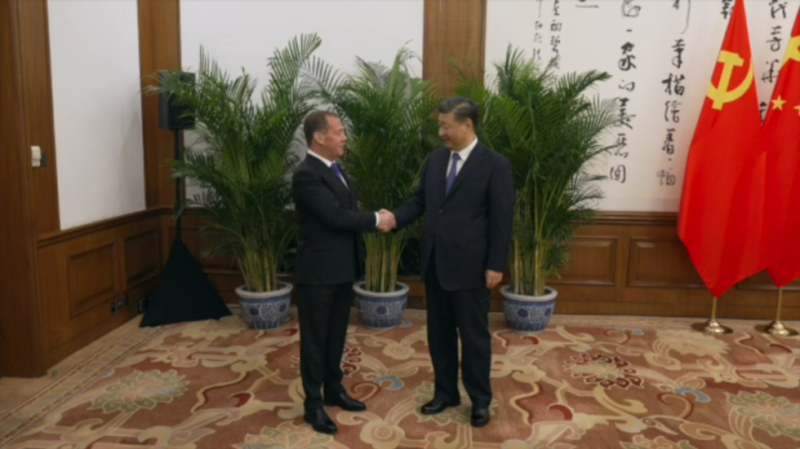 Dmitry Medvedev, the former president of Russia and current deputy chair of the Security Council, met with Chinese President Xi Jinping on Wednesday during a visit to Beijing.

Medvedev’s office said that during his meeting with Xi he delivered a personal message from Russian President Vladimir Putin, according to Russian media. Xinhua said it contained friendly greetings and best wishes to Xi, who asked his guest to convey his response in kind to the Russian leader.

In a brief statement about the nature of the meeting, Medvedev said he and his Chinese host discussed intra-party cooperation, among other things. Xi was re-elected as secretary general of the Communist Party of China in October. Medvedev leads the ruling United Russia party.

The two officials also discussed bilateral relations between China and Russia as well as international affairs, including the crisis in Ukraine, Medvedev added. He called the talk “very useful.”

China’s president hailed contacts between the two parties as a unique platform for building political trust between the nations, according to a statement carried by Xinhua.

Speaking about the situation in Ukraine, Xi reiterated China’s call for restraint by all parties and urged them to find a peaceful resolution. He expressed hope that the conflict could be ended through political means.

According to Xinhua, Medvedev said that events remained complicated but that Moscow was willing to resolve them through peace talks.