Home / WORLD / Media sounds the alarm as man nabbed in DC with pistol, 500 rounds of AMMO & ‘fake pass’ . . .neglects to tell rest of the story 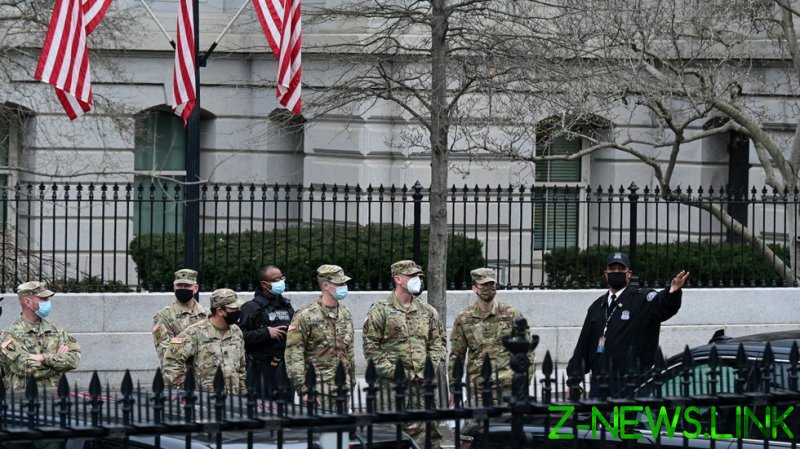 “There’s very disturbing breaking news here in Washington. CNN reports U.S Capitol Police arrested a Virginia man with fake inaugural credentials, a loaded gun and over 500 rounds of ammunition,” CNN’s Wolf Blitzer reported, saying there would be special coverage from the channel on the incident.

The fact, that the man – Wesley Allen Beeler – also had pro-gun stickers on the window of his pickup truck, when he was arrested on Friday in downtown Washington, apparently became a major red flag for the outlets choosing to highlight the detail.

The report has sent online pundits into frenzy, prompting some of them to question how such a supposedly dangerous individual could have been “released on his own recognizance” by a judge and merely told to stay away from the capital instead of being taken into custody.

According to the arrest sheet, released shortly after the news on the supposedly failed intrusion into the secured perimeter made headlines, Beeler pulled up at the intersection of North Capitol Street on Friday and presented “an unauthorized inauguration credential” to the officers, manning the checkpoint – not a “fake pass” as was initially reported.

After police determined that the credential “was not authorized to enter the restricted area,” one of the officers spotted “several firearm-related decals” on Beeler’s car, including “Assault Life” and “If they come for your guns Give ‘Em your bullets first.” When asked if he had weapons on him, Beeler admitted he had a Glock under his armrest. The officers moved to detain Beeler, and, having searched his car, found the handgun, 509 9MM rounds of “hollow point & ball ammunition” and “12 gauge shotgun shells.” Beeler was arrested for carrying a pistol without a license and for possession of an unregistered firearm and ammunition, but was later released.

The loaded 9mm Glock pistol, the bandolier full of shotgun shells and the stickers probably fit the mainstream media narrative in the wake of this month’s assault on the US Capitol by election-fraud protesters. Democrats have branded supporters of President Donald Trump and other conservatives as potential domestic terrorists, and many, including Trump himself, have been kicked off social media platforms for the safety of the republic.

But the rest of the story surrounding the arrest of the 31-year-old perhaps was not that fitting, as only the Washington Post carried the man’s account of the events.

Beeler’s mother and wife told the newspaper that he has a private security job in Washington, which requires that he be armed, and he has been going to the city every day to work his shift.

Beeler himself told the WaPo in what the outlet described as a “tear-filled interview” that he has been working for MVP Protective Services security firm in downtown Washington for the past week. He called his alleged attempt to breach the perimeter while armed to the gills “an honest mistake,” saying that it was just him “forgetting to take it out of my truck before I left for work.”

“It still comes back on me, but I’m not a criminal,” he said, saying that he was unaware of the D.C laws on the issue and “got lost in D.C” because he was “a country boy”.

Beeler has also claimed that while his firearm is not registered in DC, he has a valid license to carry in his home state of Virginia.

In a later update, WaPo’s Carol Leonnig reported that Beeler in fact did have a  “proper Park Police pass,” but that Secret Service and other law enforcement in the area had not been made aware of this.

Leonnig also tweeted that Beeler “was cleared from further investigation.”

After the additional reporting shed some light on the incident, CNN has issued a correction. However, the “important update”posted by Blitzer has been shared considerably less than the original breaking news.

Washington Examiner reporter Byron York sent out a Twitter message on Saturday illustrating the dramatic difference between CNN’s and the Post’s telling of the Beeler story.

Much of the story still isn’t clear. Nevertheless, Biden supporters were still kicking around theories that a sinister plot could be behind the arrest. “Sometimes people convince themselves of things, missions they’re on, when part of a cult or belief system,” one anti-Trump observer said. “I am not factually suggesting that’s what this is – just that it’s a possibility.”

“Don’t think for one minute they are done,” another tweeted.