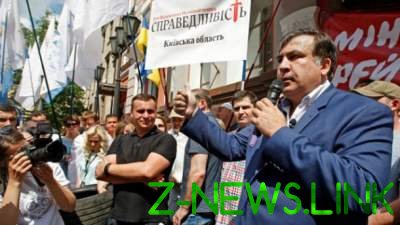 On Monday, the first after the revolution of Dignity started to develop a coalition of forces.

After the resounding return to Ukraine on 10 September, the former President of Georgia Mikheil Saakashvili has declared its intention to continue the struggle for change of power in Kiev. It is possible that the controversial policy goal would be the overthrow of the administration of his former ally Petro Poroshenko.

At the end of July Poroshenko has deprived Saakashvili’s Ukrainian citizenship until he was in the US. Ukrainian Ministry of justice in the case that a politician will dare to cross the border of the state, threatened him with deportation to Georgia, where the former President is accused of abuse of power. However, September 10, surrounded by his supporters and journalists Saakashvili illegally broke into the territory of Ukraine, reminds the journalist of the Neue Zuercher Zeitung Paul fluckiger.

The author of the article explains that the gap between Saakashvili and Poroshenko happened about a year ago: then, as head of the Odessa state administration, the Georgian politician accused Poroshenko and his entourage of corruption and links with the oligarchs, involved in criminal activities

As for the “rapid return” of Saakashvili in Ukraine, after the breakthrough of the Ukrainian border, he went to Lviv, where he met with the mayor and a critic of Poroshenko Andriy Sadovy. Before that, on September 9, Saakashvili met with Yulia Tymoshenko, Valentin Nalyvaychenko and a number of MPs from the “Batkivschyna” and “Samopomich” in the Polish city of Rzeszow, where they discussed the “fair” solution to the situation around Saakashvili.

Thus, on Monday, the first after the revolution of Dignity started to develop a coalition of forces dissatisfied with the current reforms. Participation in this coalition of fierce populist Tymoshenko makes the situation extremely dangerous for Ukraine, warns fluckiger.