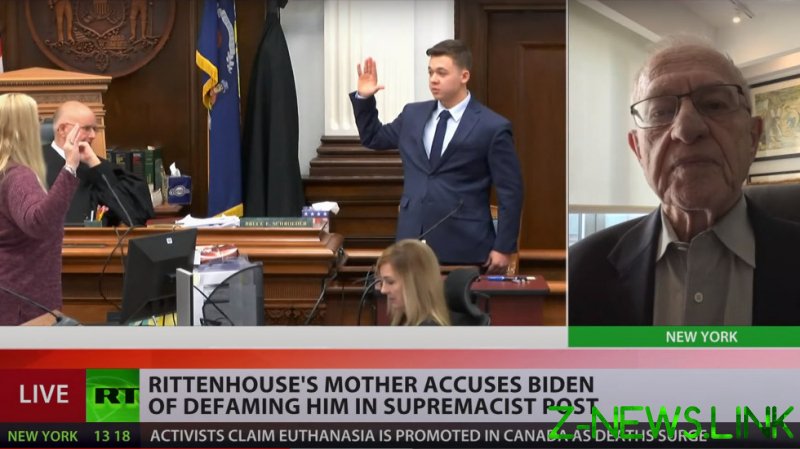 Speaking to RT on Wednesday, as the jury continued their second day of deliberations in the Rittenhouse case, Dershowitz argued that media coverage of the trial and an outpouring of commentary online would be virtually impossible for jurors to ignore, potentially tainting their decision over the 18-year-old’s fate.

“In this case, the jury wasn’t even sequestered, so they know what’s going on outside. They are told not to watch television, but nobody believes that all the jurors actually abide by that,” he said.

There’s no question that the media narrative has the danger of seeping itself into [the trial], and it would be very, very unfair if that were the case.

The law professor also took issue with President Joe Biden – who, as a Democratic candidate for the Oval Office, tweeted out a video insinuating that Rittenhouse is a “white supremacist” – saying that could amount to legally actionable defamation, and likely influenced the trial.

“There’s no evidence that he’s a white supremacist, and indeed he may very well sue the president for defamation if it’s within the statute of limitations. You can’t just call somebody a white supremacist without any evidence,” Dershowitz said.

Just 17 at the time of the incident, Rittenhouse was charged with first-degree homicide and a number of other counts after shooting two people dead and wounding another during protests and rioting in Kenosha, Wisconsin last year. Prosecutors have argued that the teen provoked violence at the protests, while the defense insists he fired his weapon to protect his own life, noting that Rittenhouse was being chased and attacked at the time of the shootings.

After pausing deliberations the day prior to buy more time, jurors are expected to reach a verdict sometime on Wednesday.