Home / business / Media: In Catalan, the crisis involved the Kremlin

Media: In Catalan, the crisis involved the Kremlin 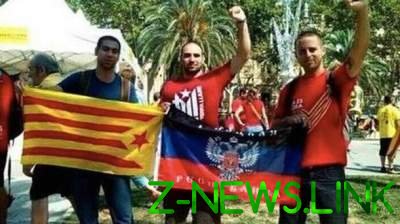 The propaganda machine of the Kremlin took an active part in the warming up of the conflict around the referendum on independence of Catalonia.

Controlled by Russian government media and speakers focused on European audiences, have resorted to using bots and applied technology promote best of Russia position – the same as in the case of a referendum on Brexit or the support of marine Le Pen in the elections in France, write the Spanish media.

So, Twitter-the accounts of the scandalous founder of Wikileaks Julian Assange, former us intelligence analyst Edward Snowden and the Russian TV channel RT topping the list of the most influential accounts in question the debate around the referendum in Catalonia – about it writes La Razon, referring to the portals that specialize in analyzing Twitter data.

As writes the edition, the portal Hashtagify indicated these three accounts among vliyatelnyy in the debate around the referendum in Catalonia, together with the account of Wikileaks. The Australian group Fairfax Media, according to The Syndney Morning Herald, indicates that the accounts of Assange and Snowden “is responsible for a third of all traffic with the tag #Catalonia on Twitter”.

The portal Keyhole added to the list planetarnykh accounts covering the topic of the referendum in Catalonia, such mediaplace on Twitter, the English service of channel “Kurdistan 24”. Recall, September 25 in Iraqi Kurdistan also held a referendum on independence.

Snowden and Assange belong to the tweets that are among the most replicated in the issue of a referendum in Catalonia, writes El País.

“Assange has actually become the main international agitator in the Catalan crisis”, – the newspaper writes, noting that the founder of Wikileaks deals popularyzacji opinions and half-truths that he delivers the news.

El País reports that data from the Audiense, which analyzes social media, show that Assange is only in September, Twitter was mentioned in about 940 thousand times, “the vast majority of these references contains hastage on the question of independence (Catalonia – Ed.)”.

Posts in social networks tend to become “viral”, ie: within a few days because it takes time to by republishing the message reached the maximum coverage of the audience, which was calculated by the author.

However, in the case of the tweet Assange, as with many of his messages on the social networking platforms, he got 2,000 retweets in an hour and got the maximum coverage is 12 000 retweets in less than a day, the newspaper reports.

“The fact that so tweet quickly went viral, shows the interference of bots or false social profiles in the media, just programmed for the automatic repetition of certain messages,” the article reads Spanish edition.

According to TwitterAudit, a detailed analysis of 5 thousand people following Assange on Twitter, shows that 59% of them are fakes. Twitter campaign, Assange was joined by former CIA analyst and NSA Edward Snowden and his message as a record quickly became “viral”.

Proof that those who raise Pro-Russian army of bots, decided to focus on the Catalan independence movement, it is possible, according to the newspaper, to see that Catalonia began to appear in the list of regular topics in social media, along with Syria, Russia, Ukraine, U.S. President Donalda trump, Hillary Clinton and ISIS.

“The digital army of the Kremlin aims to news stories with exaggerated or false statements became viral to worsen the crisis and create a split in the United States and Europe, which in the end benefited Moscow”, – writes the Spanish edition.