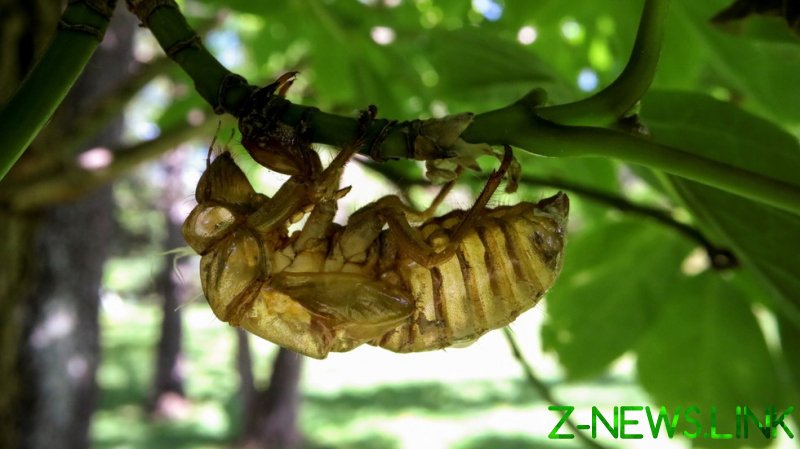 Beady-eyed and wriggling, hundreds of billions of cicadas emerged last month from their underground hibernation across the eastern United States. This year’s crop of bugs are one of 15 broods, each of which emerges every 17 years to screech, mate, and eventually die off after around three weeks.

The cicadas are hunted for food by bats, wasps and birds, but this time they faced a new predator: man, or more specifically, a certain subspecies of liberal dying to wean his fellow man off a traditional meat-rich diet and onto a repulsive nutritional regimen of limbs, antennae and exoskeletons.

That’s right, the bug people are at it again. Before the disgusting creatures crawled out of their holes (the cicadas, not the liberals), journalists were convincing the public that these insects make a great meal. “The Brood X cicadas are now the buzziest food trend,” NBC gushed. “Why not embrace Brood X as the free-range, sustainable source of protein that it truly is?” the Silicon Valley nu-males at Wired squealed.

CNN’s Brianna Keilar scrunched through a cicada sushi roll live on air over the weekend, noting that it was “actually quite delicious,” after chef Bun Lai told her: “eating insects is really the future.”

A significant number of Americans must have warmed to the idea of eating cicadas, because the Food and Drug Administration (FDA) put out a warning on Wednesday:
“Don’t eat #cicadas if you’re allergic to seafood as these insects share a family relation to shrimp and lobsters.”

It’s difficult to imagine lines of customers queuing up for soy-marinated cicadas, save for the adventurous eaters patronizing Lai’s exclusive dinner nights or attending a cooking class with ‘Brooklyn Bugs’.

Yet the academic and media elite has been trying for almost a decade to get the public to abandon their cultural hang-ups and tuck in to creepy crawlies, with limited success. The environmental impact of livestock rearing, looming overpopulation, and the cost-effectiveness of insect-derived protein are all cited to wheedle the populace into compliance, and new articles extolling the virtue of entomophagy are churned out on a weekly basis by the liberal media.

And, judging by the deluge of negative comments that accompany any of these articles, people quite simply don’t want to eat the bugs. If insects truly were just as good as meat, we wouldn’t need to be beaten and broken before we’d accept them for dinner.

The whole ‘eat the bugs’ operation reeks of social engineering. It’s always pushed by the same people who want you living in pods, drinking meal-replacement soy slop, and pumped full of drugs to lessen your dangerous impulses. They want you to abandon your pets and your car, and to submit to ‘climate lockdowns’ forever, all to fulfil their own Malthusian vanity projects.

Cicadas may taste, as Brianna Keilar insisted on CNN, like “soft shell crab,” but diners still won’t submit to the humiliation ritual of eating them.

That is, for now. Though the push to eat insects is years old, factors unique to the present day might soon force the public to get on board. Pandemic-related shortages and supply chain disruptions, as well as inflation triggered by government spending hikes, have driven meat prices to record highs in recent months. On top of this, a devastating cyberattack hit the world’s largest meat processor, JBS, last week, instantly crippling around a fifth of the US’ beef processing capabilities and driving prices even higher.

The bug-pushers in the media will surely use ballooning prices and bare shelves to mount a fresh offensive in their dietary crusade. As former Chicago Mayor Rahm Emanuel famously said in 2008, a serious crisis is “an opportunity to do things that you think you could not do before.”

To the insect aficionados, the potentially ruinous combination of inflation and shortages are not a bug in the system, but a feature to be exploited.