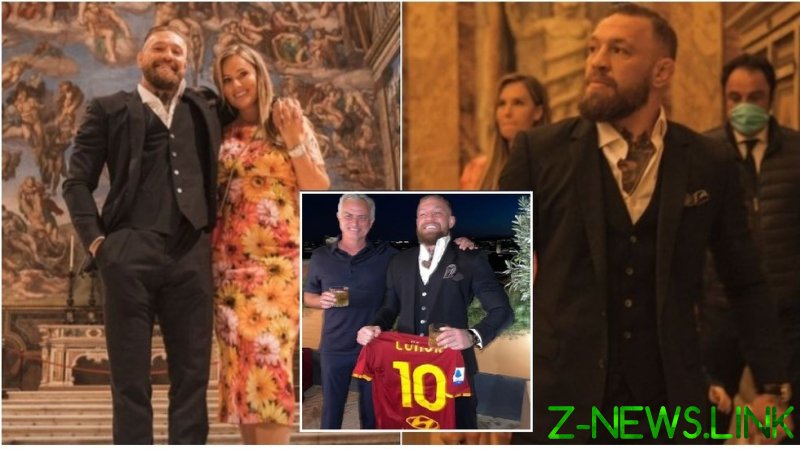 The Irishman continues to recover from a horror leg break in his last octagon outing.

Suffering a doctor stoppage loss in the first round of a trilogy bout with bitter rival Dustin Poirier at UFC 264, he has since been seen in cities such as Chicago, where he threw out a widely-mocked first pitch at a Cubs game, and Miami, where he was given freedom of the city and enjoyed a controversial shoeshine.

READ MORE: ‘Why film it?’ UFC star Conor McGregor splits opinion after showing himself getting shoeshine in Miami (VIDEO)

Heading over the Atlantic back to Europe, McGregor is currently in Rome since arriving earlier this week and had his son Rian christened in one of the holiest places for Catholics in the Vatican on Saturday.

Joined by long-term partner Dee Devlin plus their other kids Conor Jr and Croia, McGregor also had his mother Margaret and sisters Erin and Aoife in tow, and was snapped looking sharp in a blue suit and waistcoat.

Spotted out shopping protected by security and pushing Rian’s stroller at times, he has also been mobbed at the Hotel De La Vilee after booking out its entire terrace for dinner last night.

“It’s great to see Italy, and especially Rome, on its feet strong and vibrant and energetic and Italian silk on the skin. Is it butter? No, it’s McGregor and the Italians,” he wrote on social media, while sharing a video of adoring fans taking pictures of him on the streets.

Also on Friday, McGregor crossed paths with one of the Eternal City’s newest celebrities in Roma boss Jose Mourinho.

This morning, the two-time Portuguese Champions League winner shared photographic evidence of the encounter on Instagram and wrote: “Yes it’s him!”

“Yes, the great Notorious is in Rome and yes it was a real pleasure to meet him, to share some stories and to offer him the most beautiful shirt in town [from AS Roma].

“He made a miracle, it’s impossible to say no to Conor,” he added, while also revealing he “had to”  try Mac’s Proper No. Twelve whiskey.