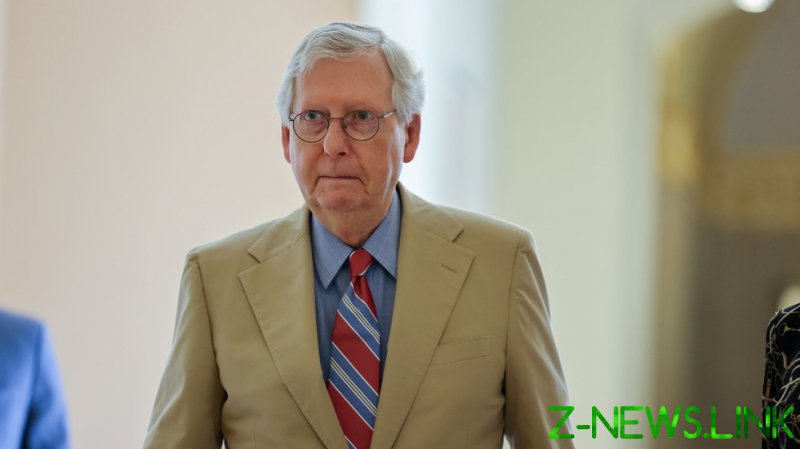 Speaking with conservative talk radio host Hugh Hewitt on Monday, McConnell revealed he would take a similar approach to a Biden nominee to the Supreme Court if Republicans regained control of the Senate in 2022 to the one he did when Barack Obama tried pushing forward Merrick Garland in 2016, a move Republicans blocked, with McConnell citing the divisive upcoming presidential election as his reason for postponing.

“I don’t think either party… if it were different from the president, would confirm a Supreme Court nominee in the middle of an election,” McConnell said when asked about the hypothetical scenario, which would also depend on Republicans reclaiming control of the Senate.

Many activists have pushed for Breyer, 82, to step down from the Supreme Court before the fall to ensure the party does not end up in the scenario McConnell is contemplating. Rep. Alexandria Ocasio-Cortez (D-New York), one of the more progressive members of her party, told CNN on Sunday that she’s “inclined to say” Breyer should retire.

McConnell has faced heavy criticism for his blocking of Garland, especially after Justice Amy Coney Barrett was pushed through during an election year in 2020. The difference, McConnell told Hewitt, is that in 2020, the president and the majority in the Senate belonged to the same party.

On whether 18 months before a presidential election would be enough time to support a new Justice, McConnell would only say “we’d have to wait and see.”

Rumors about Breyer’s retirement and the potential of a new Supreme Court Justice have fueled ongoing debates about court-packing – aka expanding the number of seats on the Supreme Court, which currently stands at nine – something numerous liberal activists have said they support to avoid political bias taking over the Court.

McConnell praised Breyer, however, for pushing back against the idea of expanding the court.

“I do want to give him a shout-out, though, because he joined what Justice Ginsburg said in 2019 that nine is the right number for the Supreme Court,” the Kentucky senator said. “And I admire him for that. I think even the liberal justices on the Supreme Court have made it clear that court packing is a terrible idea.”