Home / WORLD / McConnell draws ire from both sides of the aisle by voting to acquit Trump, then blaming him as responsible for Capitol riot

McConnell draws ire from both sides of the aisle by voting to acquit Trump, then blaming him as responsible for Capitol riot 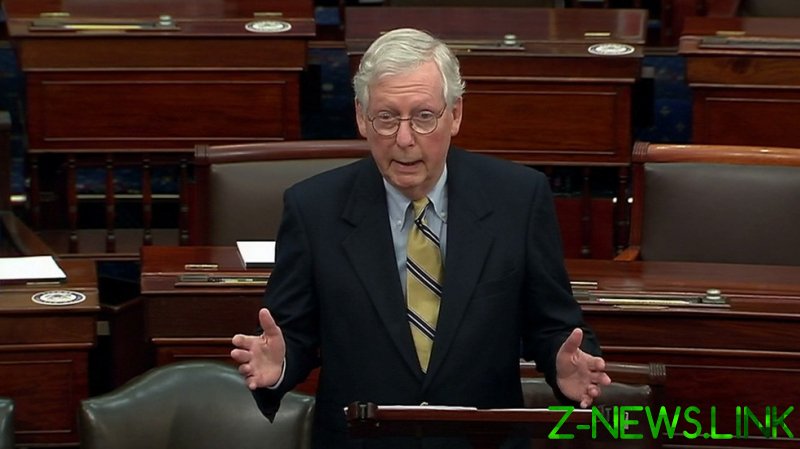 McConnell (R-Kentucky) was among the 43 GOP senators who voted on Saturday to acquit Trump in the former president’s second impeachment trial, leaving Democrats 10 votes short of the two-third majority that was constitutionally required for conviction. But McConnell then gave a speech blaming Trump as “practically and morally responsible” for provoking the January 6 riot – essentially the basis of the impeachment case against him — and even suggested that Trump could be criminally prosecuted or sued in civil court for damages. He condemned Trump for “a disgraceful dereliction of duty.”

“Impeachment was never meant to be the final forum for American justice,” said McConnell, who voted against conviction because he didn’t believe the Senate had the constitutional jurisdiction to convict a president who had already left office. McConnell added, “He didn’t get away with anything yet. We have a criminal justice system in this country. We have civil litigation. And former presidents are not immune from being held accountable by either one.”

If McConnell was trying to thread a political needle through warring factions, he apparently missed the mark as both sides bashed him for “trying to have it both ways.” Democrats said it was absurd for McConnell to vote against conviction on a “technicality” when it was the senator himself, then majority leader, who allegedly blocked the impeachment trial from behind held before Trump left office.

“McConnell’s literal claim right now: Trump did it, but the only time the Senate could lawfully try trump was in January, when I prevented it,” MSNBC host Ari Melber said.

House Speaker Nancy Pelosi (D-California) was incensed, saying McConnell was “trying to have it every which way” and joined with “a cowardly group of Republicans” in voting for acquittal.

McConnell also failed to win any friends in his own party. “If only McConnell was so righteous as the Democrats trampled Trump and the Republicans while pushing Russia collusion bulls**t for three years or while Dems incited 10 months of violence, arson and rioting,” Donald Trump Jr. said.

Conservative author Mike Cernovich said McConnell’s “self-destructive” speech would ensure that Republicans fail to take back control of the Senate in 2022. “Trump got the best of the dumbpeachment by far,” Cernovich said. “He came out the winner. That’s why Democrats called it quits and McConnell is ranting. They all know it. Trump won.”