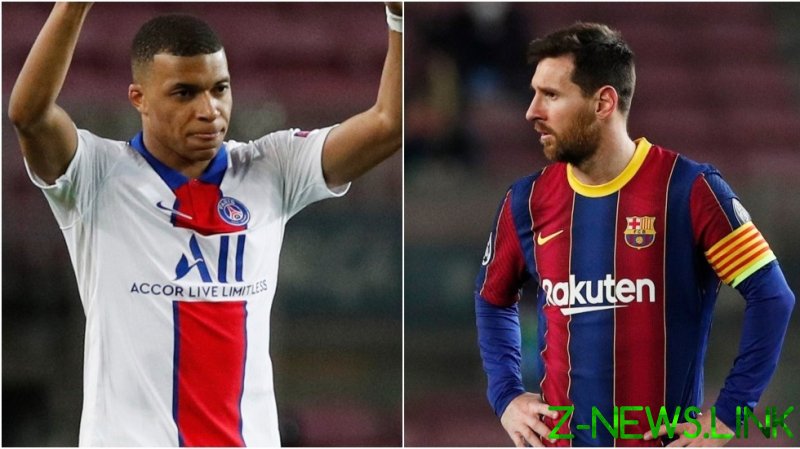 Mbappe was inspired as he put Barcelona to the sword in their Champions League last 16 meeting at the Nou Camp, reducing the likes of Gerard Pique to a comedic meme as the veteran defender clutched desperately at the 22-year-old’s shirt in an effort to stop him.

If ever there was an image to sum up Barcelona’s evening, surely that was it. 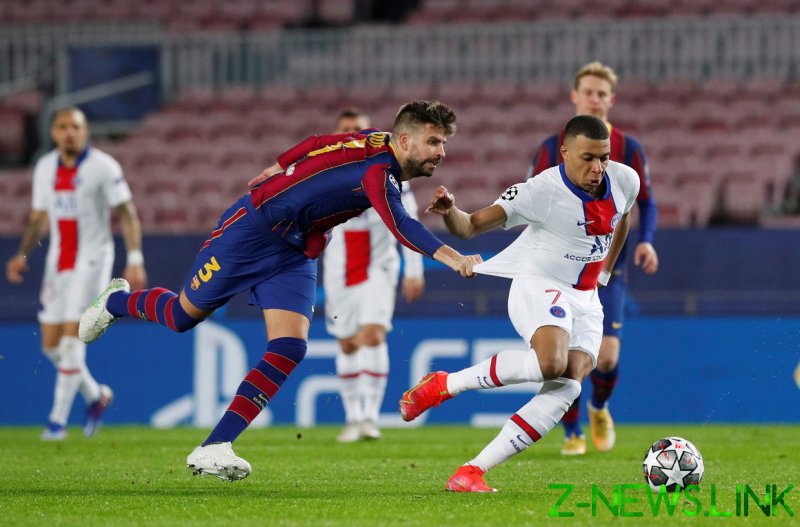 Hat-trick hero Mbappe left with the matchball, while Barcelona fans were yet again left with the image of a dejected Messi trudging off at the final whistle, head bowed.

It was joked that at least Barcelona’s 4-1 loss had been only half as bad as the hammering they suffered at the hands of Bayern Munich in last season’s competition, although such macabre silver linings are unlikely to make Messi any more inclined to remain in Catalonia beyond the end of the season.

Barcelona have, of course, pulled off a famous comeback against PSG before in this competition, but this time around only the most diehard of the Blaugrana faithful would bet on a sequel to ‘La Remontada’ when Ronald Koeman’s men head to Paris for the second leg in March. 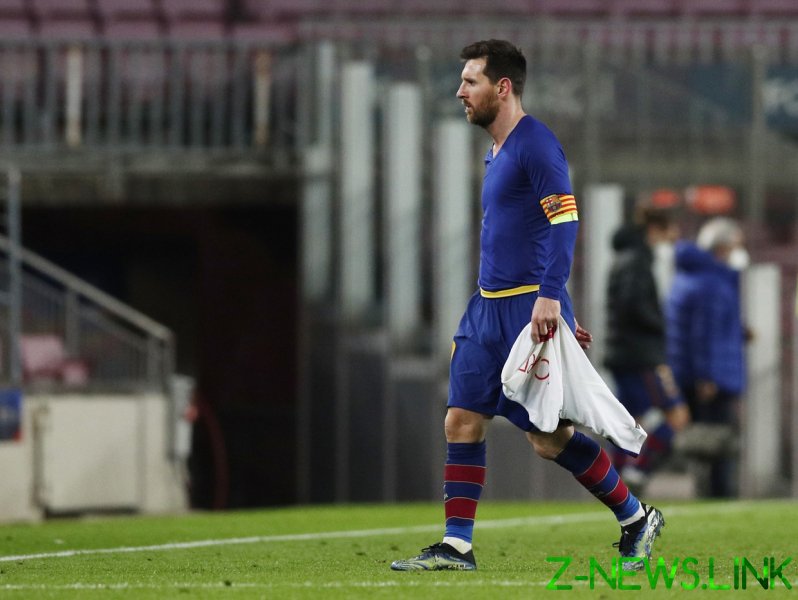 Messi was defeated again on a crucial Champions League night for Barcelona. © Reuters

It seems increasingly likely that Messi has now played his last Champions League match at the Nou Camp, and it may have come against the club who have been more and more audacious in their public courtship of the six-time Ballon d’Or winner.

PSG’s overtures have been dismissed as “disrespectful” by Barcelona, but the French club’s humbling of the Catalans signaled that they have the ambition that Messi appears to crave so badly in the twilight of his career.

Fueled by Qatari petrodollars, the French champions are widely seen as one of the few clubs – primarily along with Manchester City – with the financial clout and footballing credentials to land the Argentine this summer.

The recent signs seem to indicate a concerted effort to do just that, from comments by director Leonardo that PSG had “reserved a place at the table” for discussions with the 33-year-old, to public wooing from PSG stars such as Angel Di Maria.

The arrival of countryman Maurico Pochettino in the PSG dugout and the presence of friend and former teammate Neymar may also be enticing factors for Messi.

Neymar finally seems settled in Paris. Rumors of a return to Barcelona have subsided, not least because of the supposedly parlous state of the Catalans’ finances. According to reports, the 29-year-old Brazilian has agreed to extend his stay at PSG until 2026.

Mbappe, likewise, appears to be closer to inking a deal to remain at PSG beyond the end of his current contract in 2022, rather than making a move to Real Madrid, who like Barcelona have been left counting the cost of Covid on their finances.

Mbappe asserted on Tuesday that “I have always said that I am happy here [at PSG]. This sort of match makes me even happier.”

That should come as music to PSG fans’ ears, and the club should move heaven and earth to nail him down to a longer-term deal, just as with Neymar. 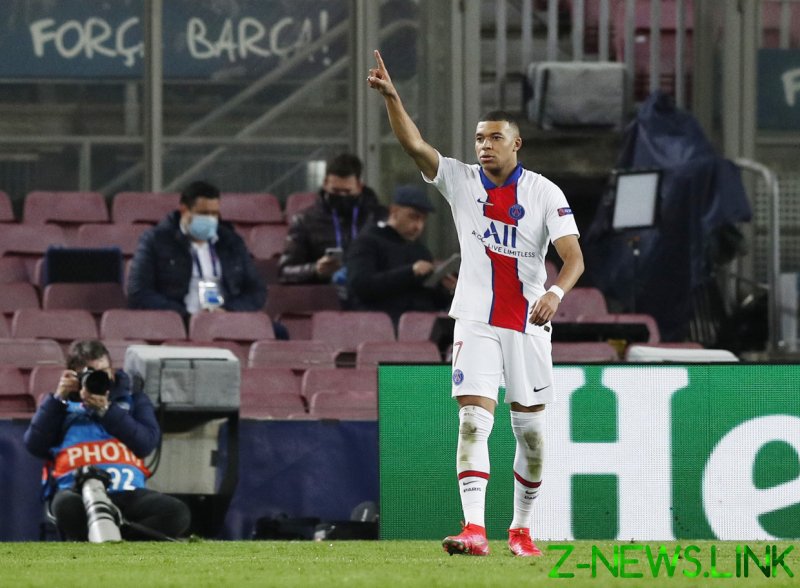 Mbappe was at his blistering best against Barcelona. © Reuters

Assuming PSG can lock down their frontline of Neymar and Mbappe for the years to come, it should leave the French champions pondering whether they really need to add Messi to the mix at all.

Between them, Neymar and Mbappe have a total of 194 goals and 106 assists in a combined 256 appearances for the club. Already a World Cup winner, Tuesday night showed that Mbappe is intent on ascending to even greater heights as a future Ballon d’Or king.

Messi will be available as a free agent this summer, which will lighten the financial load of any suitors, but the Argentine will nonetheless need to reduce his colossal wages wherever he ends up.

Quite how handsomely Messi is paid at Barcelona was revealed in leaked documents which last month showed he could pocket up to an astonishing €555 million across four years for the last deal he signed with Barcelona. 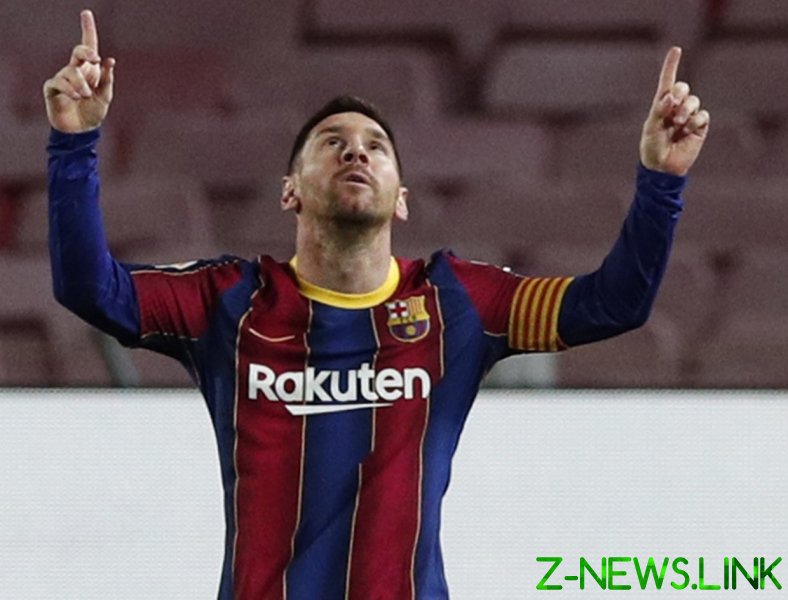 Messi is the best-paid star in world football. © Reuters

As one of the world’s biggest names across any sport, Messi will bring massive marketing value to whichever club he lands at next.

He is also a man with no need of more money, and may be willing to significantly sacrifice his pay demands to find a club with a footballing project that he deems most worthy.

But even with some creative use of the books and reduced demands from Messi, it has been questioned whether PSG could afford him and remain within UEFA Financial Fair Play (FFP) parameters, especially with the priority of bumper new deals for the big-earning Neymar and Mbappe.

Would PSG be willing to bend their pay structure so much to accommodate Messi in a frontline which already boasts two of the world’s very best players, and who have fewer years on the clock?

After years of being a soft touch in Europe, PSG are increasingly starting to assert themselves on the biggest stage. Last year’s Champions League final appearance was a big step, and Tuesday night in Barcelona was another statement of intent to show they mean business again this year.

It’s easy to see why Messi may have had his head turned by the project in Paris, especially with the charismatic Pochettino now in charge and with Neymar and Mbappe looking increasingly likely to stick around.

However, looking at the reverse of that equation, and especially in the afterglow of Mbappe’s latest masterclass, it’s becoming less evident why PSG would need the Argentine to bolster their ranks in footballing terms.

Perhaps PSG can break the bank and sign Messi this summer, but just because you can, it doesn’t mean you should.