Home / WORLD / May Day mayhem: Protesters and riot cops battle in the streets of Lyon (VIDEOS)

May Day mayhem: Protesters and riot cops battle in the streets of Lyon (VIDEOS) 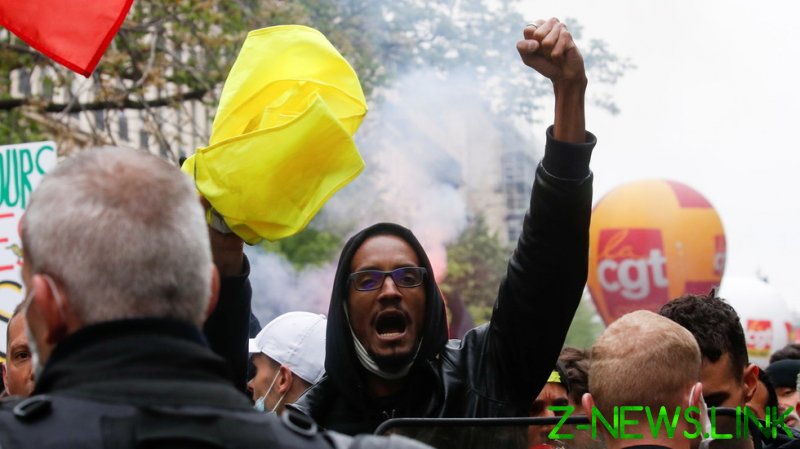 Trade unions and workers’ groups took to the streets of Lyon on Saturday to mark International Workers’ Day. Waving red banners, an estimated 3,000 workers were soon joined by black-clad anarchist protesters, who reportedly clashed with the larger groups of demonstrators.

Marching toward Place Bellecour in the center of the city, the procession found its way blocked by riot police. Scuffles soon broke out between the more militant anarchists and the police, who charged at the crowd several times.

As officers pushed the crowd back, some protesters resisted, and were met with batons and shields. Video footage shows the cops clubbing some protesters and dragging them off the street. French media reported at least four arrests by early afternoon.

When the procession finally reached Place Bellecour, the atmosphere was festive. Protesters danced, played drums and waved brightly colored umbrellas. However, police soon broke up the party with clouds of tear gas, after some demonstrators reportedly damaged protective panels around a statue of Louis XVI.

Similar demonstrations are being held in Paris, Toulouse, Bordeaux, Nantes and Marseille, with several thousand participants reported in each city. Paris already saw running street battles between riot police and a gathering of anarchists and Yellow Vests protesters. Using tear gas and batons, the cops managed to break up the group, with the stragglers rejoining the trade unions and workers’ groups afterwards, according to Le Parisien.

Rather than focusing on one specific issue, May Day is usually a clearinghouse for leftist dissent of all kinds, and across the country, protesters came together to air a spectrum of grievances. Some protested their wages and working conditions, others marched against new security bills that would dramatically extend the police’s surveillance powers and criminalize the sharing of pictures of officers. Still more protested the government’s perceived inaction against climate change and response to Covid-19.

French President Emmanuel Macron has seen his approval rating slide to 37% in the most recent polls, down from 43% at the beginning of the year. Opposition to his leadership hasn’t just come from the left either. Late last month, a group of 20 retired generals penned a letter accusing Macron of allowing Islamist “hordes” to push France toward civil war. Some 58% of French people agree with the generals’ warning, according to a poll published on Thursday by LCI TV.